From Command & Conquer Wiki
< AT-22 Hunter
Jump to: navigation, search 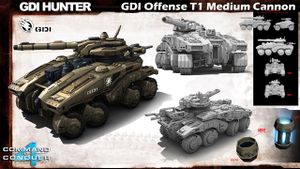 During the early years of the Tiberium Control Network's development, militias composed of anti-Kane Nod Seperatists repeatedly attempted to disrupt the construction effort. Though GDI's frontline Predator Tank was capable of repelling these initial incursions, Nod Separatists quickly turned to hit and run tactics, exploiting the Predator's slow movement speed. In response, GDI commanders began to use modified APCs to engage these faster marauders, and Predator/APC combined arms patrols were able to keep the Separatists at bay for a time.

The Separatists were not done yet, deploying an upgraded Flame Tank designed to take advantage of a gaping hole they had identified in GDI's defenses. Capable of shrugging off APC rounds due to its thicker armor and possessing an upgraded engine allowing it to outrun the aging Predator, this revised Flame Tank allowed Separatist forces to strike quickly and boldly at several TCN sites, completely razing them to the ground. Over a dozen TCN sites were lost in the ensuing works, before the Seperatist rampage was finally brought to a halt at the Battle of Waukesha.

The Waukesha garrison, commanded by Captain Leon Kamperov, was tasked with protecting TCN Node #30, TCN Node #24, and the civilian settlement at Waukesha. One fateful morning, the garrison's EVA detected a high concentration of Separatist forces in the area, more than enough to assault any and all of the three locations nearby. Fully aware that his Predators would be too slow to protect all three, Kamperov made an extraordinarily risky gamble.

Using the nearby Waukesha war factory, the garrison's engineers stripped down the APCs and reinforced them with armor plating taken from the Predator Tanks; afterward, each Predator was partially disassembled and the turret attached to the roof of an APC. Kamparov, a former engineer, hoped the resulting jury-rigged vehicle would combine the speed of the APC with the firepower of the Predator, allowing his troops to intercept and engage the Separatist forces before they could reach the TCN sites.

The gamble paid off - the raiders were caught off guard and several Flame Tanks were quickly disabled by the opening salvo. During the firefight, the more impulsive Nod vehicles made a dash for the TCN nodes, but were intercepted by the makeshift tanks and easily destroyed. After the dust cleared, the remaining Separatist forces were in full retreat, and, although most of the cobbled together vehicles were destroyed, no civilian casualties were reported and both TCN nodes remained untouched.

For his impressive victory, Kamperov was promoted to Major and commissioned to lead the design of the next generation GDI battle tank. Kamperov's design was designated AT-22 Hunter, and in time became GDI's primary battle tank; built on a next generation APC-style reinforced chassis with a 150mm railgun, the Hunter combines the speed and maneuverability of a wheeled vehicle with the power and armor of a tank. Whereas its predecessors sacrificed speed for armor, the Hunter favors the opposite, emphasizing interception and pursuit and ideally suited to defending the far-flung Tiberium Control Network. 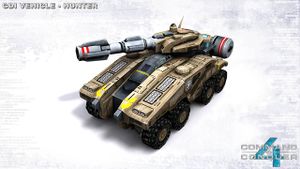 The Hunter is an evolution of the APC chassis from the Third Tiberium War. Although the APC chassis was not originally crafted to withstand direct cannon fire, significant modifications which combine a new generation armored hull with an upgraded version of the APC powertrain allow the Hunter to maintain an acceptable armor rating while retaining its speed advantage. Despite these improvements, the Hunter can't quite match the armor of other tanks, forcing it to rely on its speed when engaged in heavy combat.

Being built upon an APC framework gives the Hunter more speed than any previous GDI battle tank. Using wheels in place of treads has enabled Hunters to react to situations quickly and prevent insurgents from disrupting the TCN. Their respectable top speed allows Hunters to chase down all but the fastest enemy units and destroy them.

The Hunter has the distinction of being the first GDI vehicle equipped with both a Tiberium Core Generator and Ionized Weaponry. The generator is an efficient and relatively cheap energy source created as a byproduct of the TCN and is used primarily to power the cutting-edge ionizer array. In layman's terms, the ionizer installed in the railgun adds high energy particles to the projectile shortly before launch, substantially increasing the projectile's destructive potential. This cloud of highly charged particles ionizes with the surrounding air as it travels, giving the characteristic blue glow now common among all GDI weaponry in the TCN era.

Usually the first line of defense for the TCN, the AT-22 Hunter, with its unique combination of speed and firepower, is the vehicle of choice for patrol and interception missions in dangerous territory. Tasked not only with defending the TCN, but pursuing and destroying those that threaten it, Hunters are exposed to more combat situations in one week than other troops experience in months. This familiarity with danger and combat has made Hunter crews more experienced than their brothers in arms, and they are much quicker learners on the field of battle.