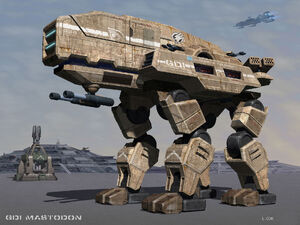 During the Second Tiberium War, the Mammoth Mk. II stood as the most dominant force on the battlefield, capable of laying waste to any and all Nod opposition with its chin-mounted auto-cannon, multiple anti-aircraft missile launchers, and state-of-the-art experimental railguns. The Mk. II's dominance came at a price, however, as the vehicle's development and production costs were notoriously high. Field tests conducted at the height of the Second Tiberium War showed that, although effective, the Mk. II was a highly unreliable beast, requiring extended maintenance on a regular basis, and as such worked best with an escort force. After the war, GDI High Command ceased production of the walker, claiming that with Kane dead and Nod all but destroyed, the "absurd" amount of money spent on weapons development would instead be redirected to Tiberium containment programs.

Following the global devastation of the Third Tiberium War, pro-military elements on the GDI Council repeatedly argued that had the Mk. II been kept in service, GDI would have seen more success at repelling the Scrin invasion. These so-called "hawks" believed that preparation for the inevitable Scrin invasion should be GDI's foremost concern, but although attempts were made to revive the Mk. II, most military funding had already been redirected to Tiberium containment and would eventually be funneled into the Tiberium Control Network.

Several years later, with the TCN construction effort well underway, the hawks finally got their way, with the GDI Council signing off on a significantly increased military budget. However, as the military solidified their plans, it became apparent that there was a sharp divide between those who wished to develop a next generation Mammoth Tank in the traditional form, similar to the Mk. I or III, versus those who favored something in the vein of the Mk. II. This debate became so heated as to nearly bring several generals to blows, forcing the GDI Council to ultimately intervene. In order to satisfy both parties - and believing that all options should be considered in the face of superior Scrin technology - the Council decided to pursue both options concurrently.

GDI combined the Mk. II walker technology with innovations Kane had garnered from the Tacitus, and formally introduced the next generation assault walker, the Mastodon, in 2069. When the first Mastodon rolled out of the renovated San Pedro war factory, Col. Nick "Havoc" Parker, retired war hero, was said to have remarked "Bureaucratic doves, 'bout damn time!" 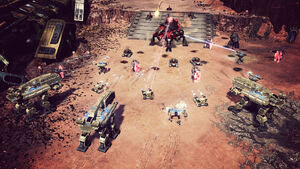 The Mastodon walker is the reincarnation of the mighty Mammoth Mk. II from the Second Tiberium War. Thanks to redesigns of the original Mk. II and advancements in technology, the Mastodon is substantially less expensive to build and maintain than its predecessor, allowing it to be deployed in groups. These groups, affectionately known as "herds", have been deployed to the front to fight Gideon and his Separatist forces. Mastodons are the ultimate ground weapon in the GDI arsenal, and to reflect their status and power, each individual Mastodon is named after a great conqueror in history.

Armed to the Tusk Unlike many of GDI's recent units, the Mastodon is not designed to defend the TCN, but to destroy any and all opposition to GDI.

The Chin-Mounted Artillery Battery is the Mastodon's primary weapon; when fired, the battery launches four artillery shells along its line of attack, decimating not only the intended target but all enemy units in the line of fire. The Mastodon also has two missile launchers, dorsally mounted, to protect it from air attacks. Although the Mastodon intentionally dropped the expensive railguns of the Mk. II in favor of the cheaper artillery battery, military commanders believe the ability to deploy multiple Mastodons, thanks to reduced production costs, is worth the tradeoff.

Up Close and Personal Mastodons are frequently deployed in groups to provide overlapping fields of fire, as the artillery battery can only attack targets in its forward arc. Despite this precaution, some Mastodons become isolated from friendly forces and are susceptible to speedy enemy units that move in close to capitalize on the Mastodon's limited firing arc. GDI engineers have analyzed the problem and have recently begun outfitting Mastodons with the "Depth Charge" Emergency Ejection System to allow the Mastodon to handle these situations. When activated, the system ejects several stored explosive shells from the Mastodon's flanks; these "depth charges" are powerful enough to deal massive damage to any enemy units in close proximity, but the flechette shrapnel is light enough to bounce off the heavy armor of the Mastodon's own legs. The system has proven to be highly effective in increasing survivability, but most Mastodons will require retrofitting as only the newest models comes standard with the feature.

The Harder They Fall... The Mammoth Mk. II boasted an experimental self-repair system to help keep the monumental walker in working shape. Recently, GDI engineers revamped this old concept and adopted the Nod-derived nanotech repair module to create the Mastodon's Backup Systems. The backup module will activate upon catastrophic system failure and will begin to slowly repair the disabled Mastodon; given enough time to rewire and repair the failed systems, the Mastodon husk can be brought back online without assistance from an engineer.