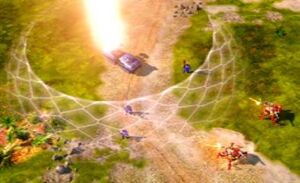 Nothing gets through the Aegis.

Aegis Shields are used by the Athena Cannon in order to protect vulnerable Allied forces from overwhelming Soviet infantry squad and armor division assaults. The Aegis shield itself is released to cover a large area and can absorb up to 2000 points of damage (equivalent to a direct superweapon strike). However the Athena Cannons cannot move or fire while the shield is active. This ability makes the Athena Cannons invaluable to Allied strike teams in the face of relentless waves of attack from Soviet and Imperial forces. When erected, the shield continues to lose potency, as the shield's area coverage is reduced sometimes after deployment.

The shield drawn its power from any connected Allied artilery satellite. When erected, the satellite projects its energy directly to the Athena Cannon. The Athena cannon then erects a specially designed energy transmission device that will spread its energy to the designated area. The shield does not affect ground units, but will destroy any incoming projectile by its sheer heat and energy. As the satellite is using its entire capability transfering its energy, it cannot perform its primary function of shooting the enemies designated by Athena cannon.

The Athena Cannon is usually thought of as another artillery piece. It is, however, a powerful base defense tool. Use of the Aegis Shield to shield the base from enemy offensive support powers like desolator airstrike or ballon bombs. Even superweapons can't pierce the aegis. Other uses are to let a unit prepare to fire, like other athena cannons, to let forces switch weapons, and to allow reinforcements to safely arrive( such as from a century drop). This ability further shows the Allies focus on survivability.

Aegis literally means shield in Greek, therefore Aegis shield is redundant. Athena is a Greek goddess (explaining the female voice of the athena cannon) related to war, and by extension, shielding, which links the Athena Cannon's name with the Aegis Shield.