African Empire also known as African Warlords was a faction created for Command & Conquer: Generals early during it's concept art period, replaced by the GLA in the final game.

Their leader was a man named Colonel Kurtz. Their soldiers were vielding both crude armor and tribal weapons such as shields or spears, with the faction's manpower seemingly being composed of both black people and arabs. Some of their soldiers even seemed to be deformed, 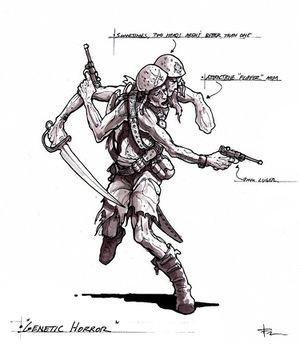 One of African Empire's units.

sporting additional limbs, with one of their infantry units even being a two-headed soldier armed with Luger pistols and a scimitar.

They seemed to utilize bizzare technology, even for Command & Conquer standards, with their vehicles having a tribal theme mixed with semi-steampunk, Mad Max-esque aesthetics, and their structures resembling traditional African wooden huts. Many slaves, some looking to be disease-ridden and sometimes even lacking limbs were chained to their vehicles, a concept that presumably evolved into GLA's Workers.

One of the concept art pieces also showcases a Nuclear Missile-like structure placed inside one of their bases.

Upon closer inspection, some of their soldiers - presumably higher in ranks - seem to be wearing World War I-era French military clothing.