Aircraft are flying vehicles used for combat, transport, or utility purposes. There are two types of aircraft, fixed and rotary wing (helicopters). The first planes were made in the early twentieth century, and first saw combat in the First World War. Typically less armored that ground vehicles, they are immune to most enemy fire when airborne, but units that are capable of anti-aircraft fire are easily capable of shooting them down. 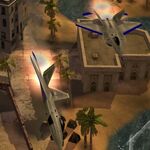 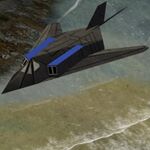 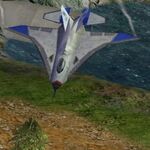 With its sophisticated, high-tech arsenal, the USA was naturally able to field the most diverse and versatile range of aircraft.

The F-117 Nighthawk, considered somewhat outdated at the time, was nevertheless useful in taking out enemy defences with its ability to sneak in undetected.

The small Aurora bomber was the pinnacle of US technological superiority - on its attack run, it flew at supersonic speeds that allowed it to evade virtually all forms of anti-aircraft weaponry. While it only carried a single bomb, it remained highly effective at levelling enemy installations.

In the Close Air Support role, Comanche helicopters could pepper infantry with their chainguns while suppressing armour with missiles that could be reloaded on-the-fly, making them the perfect backup for an assault by tanks.

Chinook helicopters ferried supplies to US bases and could carry infantry to combat.

In addition to all of these, the US deployed a range of support aircraft, including B-52 and B-3 bombers, Hercules transports, and Spectre gunships.

Air Force General Granger pioneered a number of variants on the above aircraft, including the King Raptor, which had increased payload capacity and a point-defense laser, which increased the aircraft's survivability against anti-aircraft missiles. Granger also developed the Combat Chinook, an advanced design allowing the infantry to fire from inside the Chinook. His Comanches can also hide with stealth technology.

The American 'superweapons' specialist, General Alexis Alexander, had specially modified Auroras nicknamed the Aurora Alpha. They carried a devastating Fuel-Air Bomb, as opposed to the conventional bomb normal Auroras carried but again like regular Auroras they slow down after dropping the bomb. 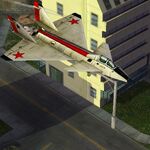 China's Air Force lacked the amount of the United States', with initially only the MiG, a Russian built ( Chinese converted) fighter armed with twin napalm missiles, these multi-role jets could also be upgraded with MiG armor which considerably improved their chances on the battlefield. 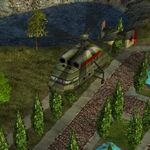 However, China's air power was bolstered considerably mid-way through the war with the introduction of the impressive Helix, an enormous and highly flexible helicopter dubbed the 'Overlord of the skies'. Through various upgrades, the Helix could be fitted with a Gatling cannon, a propaganda tower, or even be turned into a flying bunker. Loaded with Tank Hunters, a hovering Helix could demolish entire tank divisions. It could also be used to transport individual vehicles, or carry large, powerful napalm bombs.

China also deployed their own transport aircraft which carried carpet bombs, EMP bombs, and in some cases, troops.

The Chineses nuclear General, Tsing Shi Tao, upgraded his MiGs to fire miniature nuclear warheads, greatly increasing their damage potential, and his Helix helicopters mounted a miniature nuclear bomb, as opposed to a napalm one.

The Anthrax Bomber is GLAs only aircraft

The GLA lacked the resources (and the airfields) to launch an air force of its own. What they lack in Air Armadas make up with their powerful Anti-Air.

However, it did possess a small fleet of very ancient bombers, able to deliver their Anthrax Bomb. Also in several missions they used a C-130 to transport Toxins to another area. The GLA will have air units in the sequel.

The Valkyrie is assumed to fill the same gameplay role as the Comanche from the original Generals. It is a persistent attack aircraft, meaning it does not need to return to base to rearm. Instead, it can stay in the field and continue to attack once its weapons recharge.

The unknown hypersonic aircraft bomber is assumed to fill the same role as the Aurora Bomber from the first Generals.