Aircraft are flying vehicles used for combat, transport, or utility purposes. The first planes were made in the early twentieth century, and first saw combat in the Second World War. Typically less armored than ground vehicles, they are immune to most enemy fire when airborne, but units that are capable of anti-aircraft fire are easily capable of shooting them down. It is where aircraft technology development has taken a radically different path...

The Second World War was the first global conflict in which the Air Force played vitally important role. The Soviet Union in particular spent much effort in developing the Red Air Force prior to the outbreak of War. 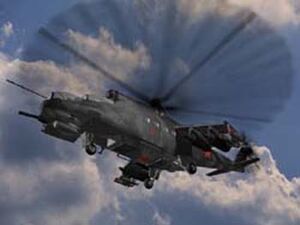 The moment enemy infantry sees a Mi-24 is the moment they die. 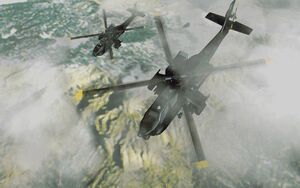 Apaches are the only gunships in the Allied air force

For aerial offense, the Allies only had the Longbow Apache Longbow, a heavily armored helicopter that possessed anti-tank hellfire missiles. Both sides also utilized CH-47 Chinook helicopters to transport personnel during the war. To compensate for their lack of air superiority, the allies developed far superior anti-aircraft weaponry. In the Legacy of tesla the allies developed a prototype of the MiG but it was destroyed by the Soviet Commander.

After Second World War, the Soviet Air Force was forcibly disbanded. This left the Soviet with virtually no air power, with exceptions of transport planes. With most of their MiGs destroyed or confiscated, the Soviet Union adopted new air combat doctrines.

The Allies learned an important lesson in modern warfare in Second World War and devoted much effort in developing an Air Force, resulting in the incredibly versatile Harrier VTOL aircraft and its many variants.

The Kirov Airship, though as slow as a snail, is a truly bad omen for the enemy. 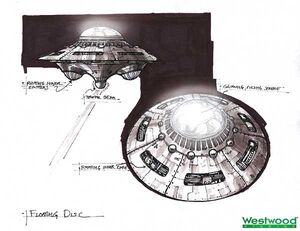 Yuri's only presence of air power was the Floating Discs, which were UFOs capable of causing unforgettable bedlam when inside an enemy base, i.e. stealing resources, shutting off enemy structures, and draining power grids. However, they were still no match for AA and, due to the altering of the timeline post-Third World War, the Floating Disc is now reported non-existent.

The Allies used Apollos which rules the skies, Ray Copters for anti air and Anti Surface purposes and the Century Bomber for bombing runs.

In the War of Three Powers and its aftermath, aircrafts were more important than in any other previous war. All three superpowers developed sophisticated and powerful aircraft. Almost all fighters and bombers utilized VTOL (vertical take-off and landing) technology. This means that airports may be constructed easily and quickly on the battlefield and takes up less space than before.

The Apollo Fighter in display.

The Allied Nation's Air Force was the most powerful in the world during World War III. These aircraft are common and standard in the military of the Allied nations. 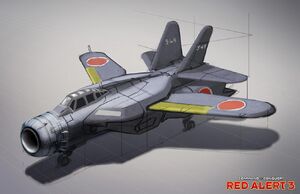 The Tengu at display - assault mech in a moment, fighter jet the next.

The Empire of the Rising Sun's Imperial Japanese Army Air Force(IJAAF) and Imperial Japanese Naval Aviation(IJNA) lacks good aircraft (until the Uprising, with the recent Giga Fortresses), but they made up with the following unique feature: the VX Technology. VX technology can enable Tengus, Strikers, Wings and, more recently, the Giga Fortress to transform to suit different combat roles. 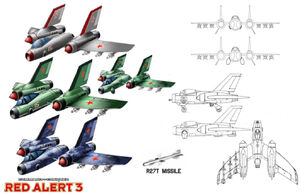 Schematics of the Soviet MiG, with alternative color schemes.

The USSR have a versatile and Deadly Red Air Force, which arguebly rivals that of the Allied Nations.

It is common knowledge all aircraft are vulnerable to any sort of AA, including opposing aircraft.

During Second World War, the Allies built millions of AA battery to shoot down Soviet MiGs, which suffered terrible casualty rates. The Soviet Union also developed an anti-aircraft defense in the form of experimental SAM Sites, which can be effective in large numbers.

In Third World War, the Allies deployed advanced Patriot Missile Systems and similar weapons against Soviet Kirov Airships and V3 Missiles, as well as Rocketeers. The Soviets used antiquated but highly effective Flak Cannons, and also equipped their Apocalypse Tanks with SAMs. On his betrayal of the USSR, Yuri developed his own anti-aircraft capabilities. His Gattling Cannons proved highly effective against Allied Harriers.

During War of Three Powers, all three Superpowers developed dedicated air-superiority fighters - the Allied Apollo, the Soviet MiG, and the Imperial Jet Tengu. The factions also developed ground-based anti-aircraft defenses. The USSR redesigned their Flak Cannons, the Allies used technology similar to their old Patriot system, while the Empire equipped their Sea-Wing Submarines and VX units with SAMs however the Empires AA is inferior to the other factions AA. Another weakness is none of the Aircraft ejects at all and every aircraft shot down were often heard screaming through transmissions.