Many of those living in the free nations have remarked that the sight of an Allied aircraft carrier docked at harbor is a thing of beauty. These bold, seafaring beasts are some of the most sophisticated naval vessels ever created, and are the culmination of a joint 10-year military design effort between American, German, British, and French engineers and scientists. This famous collaboration drew some flak for being reactionary to increased Soviet aggression. However, the results soon spoke for themselves, as reports of Allied aircraft carriers effortlessly securing contested waterways and borders soon began to spread in Allied nations and even the Soviet Union. 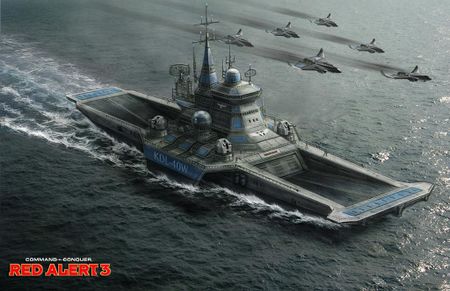 Aircraft carriers are the pride of the Allied navy. Shown here is one of the many failed prototypes that eventually led to the majestic and proven-successful design currently in use today.

Today's aircraft carriers are of course dramatically different than the relatively bloated, cost-prohibitive floating-fortress-style aircraft carriers blueprinted but never successfully launched due to the lack of a sufficient power source to fuel their voyages. The speculative design of old-style carriers was eventually abandoned when a German-engineered breakthrough in unmanned combat air vehicles (UCAVs) proved to be the missing link in the carrier's design. Though still much larger than the average ship, Allied aircraft carriers forego the thousands of crew demanded by previous proposals for an elaborate network of automated drone manufacturing-and-launch bays, maintained and operated by a modestly-sized (and expertly-trained) crew. The result is another shining example of the Allies' commitment to efficient, specialized design and conservation of precious resources. 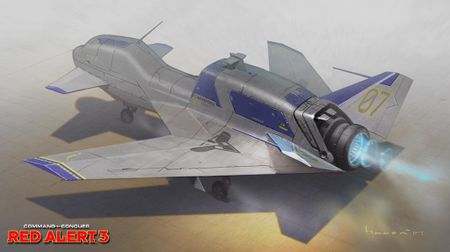 Now in active service worldwide, any given aircraft carrier contains a full complement of Sky Knight-class UCAVs, air-to-surface fighter drones proven to be highly effective in long-range engagements against fortifications and installations. Rather than suffer wear and tear and other unnecessary exposure to harm from being left out on the decks of Carriers, the Sky Knights are concealed in launch bays belowdecks, in facilities made to monitor, control, and maintain full complements of drones at all times. Drones are fast and precise, and each is armed with a powerful 500 lb. armor-piercing bomb similar to Jethroes commonly used by the Allies' Century Bombers. After releasing its payload, a given drone must return to its carrier, where it can rearm.

The aircraft carrier itself is heavily armored and its hull can even take a direct hit from a Soviet Akula sub torpedo. Its primary armament lies with its Sky Knight squadrons, although the carrier also possesses a firing mechanism for the Blackout Missile, a tactical warhead whose blast overloads all known electrical systems in its area of effect. Overall, the sheer power wielded by these spectacular ships of war means that to helm them is one of the most prestigious posts in the entire Allied military hierarchy.

Battlefield reconnaissance has revealed at least these facts about the Aircraft Carrier: