The Akula (meaning "shark" in Russian) was a class of Soviet submarine in service during the Third World War. The Akula is armed exclusively with torpedoes and specializes in anti-ship operations. These torpedoes are an improvement over early designs as they have a sophisticated tracking system to ensure a hit on enemy vessels.

Recent years have seen the Soviet Union pursuing an aggressive policy towards all perceived threats to its waterways, including the sinking of numerous civilian cargo ships and passenger liners. Emblematic of this attitude is the Akula Attack Sub, a stealthy and deadly undersea killer that is often held up as a symbol of Soviet aggression. For all of its notoriety, however, details about the Akula were largely a mystery until an Allied cargo ship found a Soviet sailor adrift in open waters, miles from all known Soviet naval forces.

The sailor, an illiterate peasant impressed into the Soviet naval service, was a crewmember of the Akula Sub K-420. During regular maintenance of one of the Akula's torpedoes, he had inadvertently damaged that torpedo’s motor, preventing an attack on the undefended Allied ship. The captain, uncharacteristically calm, ordered the sailor into a loaded torpedo tube to attempt a repair before the enemy escaped. He then ejected the crippled torpedo into the ocean along with the surprised sailor, who, resigned to his fate, swam to the surface to await capture.

Based on evidence like that gleaned from the Soviet sailor’s interrogation, Allied commanders have been piecing together the story of the Akula Sub. During its design, the Soviet navy knew it needed an effective ship killer, but also that they would have to crew these ships with poorly trained crews, often with no maritime experience. As a result, they chose the RU-7 torpedo as the Akula's main weapon. Based on the previous generation of Soviet torpedoes, the RU-7 is a time-tested design, reliable, effective, and easily used even by an inexperienced crew.

Soviet commanders realized, however, that an even more powerful weapon was needed to deal with the new generation of larger, more heavily armored naval vessels, so the Akula fleet was also given the new RU-20 "supercavitating" torpedoes. Monstrous in size and power, the RU-20s give the Akula an immense destructive capability.

However, their power is offset by a slow firing rate, trading a lengthy loading and firing sequence for high reliability.

Beyond the technical specifications of the sub, the captured sailor also gave insight into life aboard an Akula. The frantic pace of Soviet naval operations requires Akulas to stay at sea for years at a time. These long tours, in cramped quarters, skulking under tons of ocean while searching for prey, take a heavy psychological toll on the crews, and Akula captains use a heavy hand to maintain discipline and combat effectiveness. Failure is not tolerated, and reprimands are harsh. Some critics argue that these extreme conditions are detrimental to the Akulas' ability to carry out their missions, but their overwhelming effectiveness against enemy naval forces indicates otherwise. Indeed, the price of failure seems to be the whetstone that hones both crew and sub into such a deadly weapon. 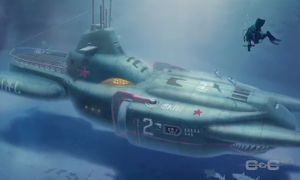 The Akula when underwater

Despite the expensive cost of building an Akula Sub, its naval existence and purpose will be well paid off, with its additional weapon: the Ultra-Torpedoes- the Akula Sub's special, yet dreaded naval weapon. These are fast-accelerating torpedoes that lack guidance systems but pack extremely powerful explosives. They can only move in a straight line and will keep on moving until they hit land, a structure, or a unit (be it friend or foe). The recharge time for the ultra-torpedoes is considerable and this ability should be used strategically. They are highly effective against structures and slow-moving units such as Aircraft Carriers. One tactic used by Soviet commanders, is to fire one salvo of regular torpedoes, and since the submarine lines up with the target, the ultra-torpedoes are much more accurate when they are fired.

Alternatively, if the enemy has no submarine defense, the ultra-torpedoes can be used in a sort of building sniper maneuver, by placing the Akula in "hold fire" mode (thus preventing it from automatically surfacing) and then launching the ultra-torpedoes at a high-value target. Since the Akula does not need to surface in order to fire the ultra-torpedoes, this is extremely effective at killing off outlying power plants, or even better, base defenses, without fear of retaliation. The ultra-torpedoes also have incredible range (technically infinite, as long as they don't hit anything), so if the player's aim is good enough, they can do this far enough away from the target as to be even outside of his enemy's sight, leaving them short a power plant and clueless as to what killed it. In serious competitive play, this has a very big psychological impact on most opponents.

The Akula Submarine is more capable of dispatching naval enemies than the Allied assault destroyer on a one-on-one basis, and is capable of defeating a Naginata cruiser if it uses its Ultra-torpedoes, though one must be wary of the Naginata Cruiser's more powerful version of the Ultra-torpedoes: the Type-S Torpedoes. It is only capable of attacking naval vessels and is somewhat more vulnerable to large numbers of enemies than the Naginata, which has the Type-S Torpedo special attack and a higher rate of fire. All Akula Subs must surface to fire and the time it takes to surface also results in a significant pre-attack delay. Aside from being scout units- they are excellent killers of important ships. While submerged, they are invulnerable to most weapons (launched from base defenses or vehicles)- except advanced base defenses, torpedoes, the Allies Assault Destroyer's main gun, and rogue Soviet Terror Drones. As with the Naginata's Type-S, care must be taken when using the ultra-torpedoes, lest they incur friendly fire. The Akula is best used in 'wolf-packs' of up to 6 submarines; they work exceptionally well as an escort to the Dreadnought.

Notes from the Field[edit | edit source]

Battlefield reconnaissance has revealed at least these facts about the Akula Sub: