Alcatraz Island is a small island located in the center of San Francisco Bay in San Francisco, California. It once served as a military outpost for the U.S. and later became the site of one of the most infamous prisons in the United States. It hosted some of the most notorious criminals in the country, among them Chicago crime lord Al Capone. It served this purpose until its eventual closure in the 1960s. 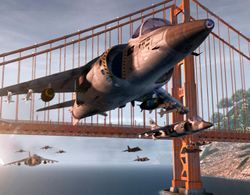 Harrier on its way to Alcatraz

In 1973, Alcatraz Island was a location for one of Yuri's Psychic Dominators, and it was placed under the firm control of Yuri's Initiates. Upon its discovery, President Dugan ordered an airstrike to take out the Dominator before it was activated. A dozen Harriers were dispatched to attack the island, but were swiftly decimated by the numerous gattling cannons guarding the island. During the melee, one Harrier broke through Yuri's defensive lines before it was shot down, sending it crashing into the Nuclear Reactor powering the Dominator. Although the airstrike failed to destroy the Dominator, the loss of power from the reactor ensured that the Dominator could not function properly when it was deployed. Yuri activated his Dominator network regardless, but the loss of the Dominator in San Francisco meant that there would be enough Allied forces left to travel back in time to halt Yuri's plans.

With help from Albert Einstein, the Americans traveled back in time to the beginning of Great World War III, where they halted the Soviet invasion of San Francisco. Agent Tanya Adams then stormed Alcatraz and destroyed all of Yuri's forces stationed on the island, and then the Dominator itself. The loss of the Alcatraz Dominator granted the Allies an advantage in their fight against Yuri.