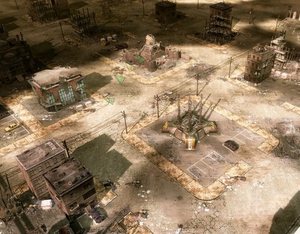 Alexandria was an Egyptian city on the Mediterranean coast.

The opening Nod offensive of the Third Tiberium War was quickly followed by a GDI counterattack in North Africa aimed at crippling Brotherhood WMD production. A strike south of the city at Casabad revealed Nod's Liquid Tiberium Bomb to GDI and the attack on Alexandria took on greater urgency. Alexandria's capture by GDI stopped the flow of components for the weapon from the area.