Engineers were Allied support infantry units employed during the Third World War and the Uprising.

Allied field engineers are responsible for keeping the Allied war machine running in top condition. Their technical knowledge allows them to repair friendly structures and capture enemy and tech structures. And their portable jet ski means that water is no obstacle for them. They also possess first-aid training, and can heal wounded friendlies using the medical supplies from their inflatable tent. 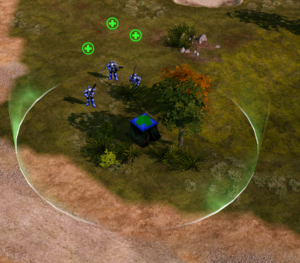 Several Peacekeepers being healed by a medical tent

The Allied engineers are equipped with medical supplies, allowing them to heal wounded Allied infantry with ease. However, in order to do so, the engineer must deploy into a first aid tent, which can be brought back down, leaving the engineer mobile again. When multiple first aid tents are deployed close together, they can heal each other and the more of them deployed the faster they cure. But these first aid tents are too small to be classified as structures, so they can be easily ground away by heavy vehicles.

In addition to the kits, they also come along with a collapsible jet-ski which can be used to cross large bodies of water and reach isolated buildings and oil derricks. Engineers have no weapons of any sort, unlike the Soviet combat engineers, who have revolvers, and they cannot sprint like Imperial engineers. Engineers should always travel with a Peacekeeper escort as they have next to no armour and because enemy forces often make them priority targets, as their ability to capture structures makes them extremely dangerous. Even so, they are better off than previous generations of engineers, as engineers had no such equipment back then. Because Allied engineers are unsuitable in conventional military roles, they typically skew older as well as wiser than the average combatant. Engineers tend to talk with in a nasal voice.