"An excerpt from, Assessment of the Impact of 3rd Generation Supply Management Technology on Global Strategic Policy by Ian Cochran Burke. This assessment was commissioned to investigate the fiscal, diplomatic, and military impact of adopting the proposed MCV Battle Command and Supply System. Burke's assessment of the impact of the MCV on warfare has proved prophetic in light of recent events."

The tactical benefits of adopting the MCV system have been argued extensively by Mathers, O'Donnell, and others (For a complete historical analysis, see Tactical Engineering: A Review in issue 468 of Modern Warfare), and little need be added here. It is worth noting that, while many focus on the MCV's use of Standardised Production Automated Manufacturing (SPAM) Modules for building construction, in fact the technology of fabricating a wide variety of weapon systems from a single universal component is not new. Traditional production structures (War Factories, Air Fields, and the like) have been using SPAM modules for over a decade: the original SPAM modules effectively redefined mobile warfare by allowing ammunition, and later spare parts and even vehicles to be manufactured on site. A more revolutionary technological aspect of the MCV system is Virtually Operated Industrial Production (VOIP), a system that allows MCVs to remotely enable the production of advanced technology weapons. This same system can now also be found in the Allied Prospector. 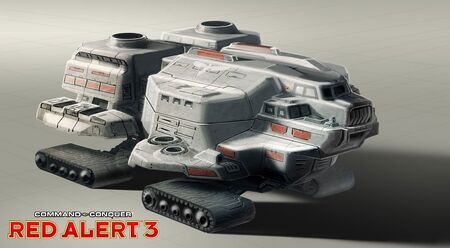 MCV commanders are experienced veterans who have seen a minimum of three tours of duty.

But the true impact of adopting the MCV system will be far more subtle. Mathers comes closest to understanding the ramifications of MCVs on the battlefield in his report to the Budget Office (See Cost Analysis: MCV). His premises are correct. The demand for forward bases in the coming conflict (have no doubt about it - war is coming) will far outweigh the number of MCVs we will be able to deploy. As MCVs relocate across the battlefield, the tendency will be to create many small, stationary bases which will remain behind when the MCV departs.

But his conclusion - that these bases will have no military value and will simply be a continuing drain on our resources - is incorrect. Even if it were true, the strategic benefits would still justify moving forward with the program. The flexibility of an MCV - their extreme, amphibious mobility; their ability to carry enough to be able to deploy a small base and fighting force even when cut off from supplies; and of course their ability to quickly construct a large advanced base when well-supplied - will provide commanders with an unprecedented ability to project precise military power. 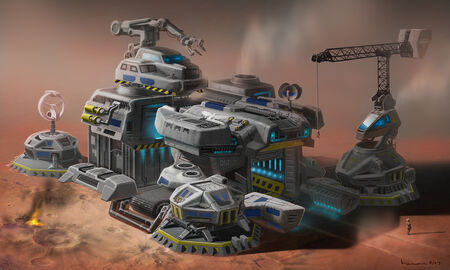 In its mobile configuration, MCVs are especially vulnerable to weapons like terror drones.

But the true value of these small bases will come after the war is over. After the main enemy forces are defeated, what will be needed throughout the combat zone is the capability to quickly restore order and provide a focal point for the integration of the recently liberated into Allied culture and society. The bases that will be created across the countryside as a natural result of MCV relocation will serve this function. They, and the MCVs that create them, will be the enduring beacons of Freedom and Justice in the aftermath of the coming conflict.