The Allies, otherwise referred to as the Allied Forces, the Allied Nations, or the Alliance, are a military alliance between the nations of Europe (mainly Great Britain, Germany, France, Greece, and Spain) during the Second World War. By the time of the Third World War, its primary members were the United States of America, Germany, Great Britain, France, and South Korea. It originally served as a unified military command of European armies. The Allies fought to protect the nations of Europe, and later, the world.

Allied generals briefed at the end of the Second World War

When the Soviet Union, under the leadership of Joseph Stalin, invaded Western Europe, the nations of Europe banded together and formed the Allied Forces in order to resist Soviet aggression.

However, the Allies could not match the might of the Soviet forces, with much of Europe falling. Because of the swiftness and brutality of the Soviet strike, most governments were unable to coordinate effectively or were devastated by the invasions. As a result, the Allied forces had to also operate both as a unified command and governing body for the alliance. Despite early drawbacks, the Allies managed to hold off the Soviet onslaught and turn the tide. The European Allies rallied and finally defeated the USSR at a high cost of lives.

What exactly happened to the Allies after the war is unclear, though it was most likely dissolved after the Soviet threat was ended.

After Stalin's death, the United States installed a new leader to the Soviet Union, Alexander Romanov. However, while Romanov appeared to be the perfect puppet for the US, he secretly harboured a burning hatred for the Allies for ruining his country.

Romanov secretly gathered communist allies under the guise of the World Socialist Alliance, a seemingly innocuous organization that gives financial aid to developing countries, and developed a technologically advanced military. Soon, his forces were ready. The Soviet military moved into Mexico under the pretense of quelling a civil war, and quickly knocked out the United States' early warning systems and nuclear arsenal with psychic technology.

The United States quickly found itself under siege by the Soviets from all sides. Many key cities, including Washington, D.C., fell to the Soviets, forcing the US military to relocate its command center to Canada. Meanwhile, Romanov erected nuclear missile silos in Belarus preventing the European Allied nations from interfering with the threat of nuclear retaliation.

Fortunately for the Allies, the US military eventually managed to turn the tide of the war and liberate several major cities from the Soviets. After destroying a Soviet Psychic amplifier device capable of mind-controlling the entire country in Chicago, however, Soviet General Vladimir launched a nuclear missile at the city, obliterating it.

Alarmed by the destruction of Chicago, the leaders of America's European allies promised to aid the US if the Soviet nuclear silos in Poland are removed. Soon, an Allied strike team consisting of Agent Tanya and several spies infiltrated the Soviet launch base and destroyed the silos, allowing the European nations to join the fight against the Soviets.

With the European nations committed to the fight, the combined forces of the Allied Nations successfully pushed the Soviets entirely out of the United States and began planning on an attack on Russia itself. The Allies then secured the laboratory of Albert Einstein in Black Forest, who has being working on an improved Chronosphere design.

After securing an area in the Florida Keys by destroying the Soviet nuclear silos in Cuba, the Allies constructed a Chronosphere there. Using the device, they launched an attack on Moscow itself. Despite fierce resistance from the Soviet forces, including Romanov's elite Black Guard, the Allies managed to surround the Kremlin. Tanya herself led a team inside the palace and captured Romanov, decisively ending the war.

After the defeat of the USSR and the disappearance of Romanov's advisor, Yuri, he came back to conquer the world using his own armies and his Psychic Dominators. Einstein improved his 1946 Chronosphere into the Temporal Displacement Device and the Allies, again, travelled back in time to prevent the Psychic Dominator Disaster. So, back in time, the war erupts, but now the Allies had to focus on 2 enemies: Yuri's psychics and the Soviets themselves. The Allies, in the end again defeat the Soviets, but did not capture Romanov and they did not invade Moscow - and lose Carville either.

They ratified a treaty with the Soviets at the Parliament Building in London which the traitor failed to destroy it in Operation: Trick or Treaty to eliminate Yuri once and for all. With Soviet assistance, the Allied forces destroyed his forces at Antarctica and imprisoned Yuri in a Psychic Isolation Chamber - thanks to the Allied Commander, Yuri will never mind-control anyone, not even a fly.

Allied logo during the third iteration of the Third World War 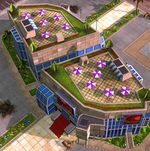 The Allied Conferences Center in France

Following the Soviet defeat in the wake of the Third World War, the Soviet leadership decided to eliminate the one they held most responsible for Allied technological superiority: Albert Einstein. To this end, they placed Colonel Anatoly Cherdenko in charge of a top secret project to build a time machine to eliminate Einstein. The machine, built by Dr. Gregor Zelinsky, worked well and Einstein was erased from history.

The time travelling expeditions however had unintended and, for the Soviets especially, unwelcome consequences. Even without Einstein, the Allies and FutureTech labs still managed to develop Chrono and Prism (in the form of Spectrum) technologies, as well as a host of other exotic experimental weapons. Additionally, a third contender for world supremacy now exists in the East, the Empire of the Rising Sun.

In the initial stages of the war, however, the Soviets had the upper hand, overrunning most of Western Europe. The Allies however foiled a Soviet invasion of England, and afterwards embarked on a successful campaign against both the Soviet Union and the Empire of the Rising Sun. The effects of Allied technological edge and superior tactics soon began to show. By the end of the war, the Allies emerged victorious over the other two superpowers. With Japan humbled and the Soviet leaders frozen in cryoprison, the Allies are ready to relax and enjoy their hard-won global hegemony, or so it seems.

After their victory in the War, the Allies now attempt to keep the peace around the world, with major help from FutureTech which provides them with new technologies, such as the Harbinger and Future Tank X-1, just to name a few, to help the Allied cause. The Allies fought in Japan once again because some of the Imperial commanders refused to surrender after the Empire's defeat. However, with the help of Prince Tatsu they managed to capture all of the hostile commanders. But right after Takara Sato was defeated, Tatsu revealed his true plans - he wanted the Allied commander to capture Kenji, Shinzo and Takara to gain control of their army and make sure no one would have stopped him from becoming the new Emperor of Japan. Tatsu unleashed his forces against the Allies, but fortunately he was defeated and captured. Takara however escaped capture. 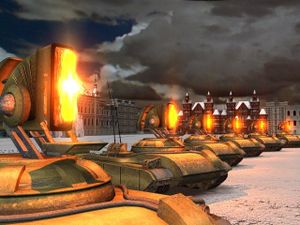 Prism tanks were among the prime examples of Allied technological superiority

The Allied Military Doctrine centered on decisive action, mobility, subterfuge, dominance of the skies, and technological superiority. The Allied forces are exceptionally well-trained, guided by superior intelligence and have at their disposal some of the world's most advanced and powerful weaponry.

During Second World War, the Alliance relied heavily upon their navy due to the Soviet supremacy in terms of armor and airpower. The only armor they had at the beginning of the conflict was their vastly inferior Light tank, of which it would take several to destroy a single Soviet Heavy tank. When the Soviets began to gain the upper hand in the conflict, a breakthrough in technology gave the Allies the Medium tank, which stood a much better chance (although not equal) to it. Unfortunately, the Soviets introduced the Mammoth tank, a tank with more firepower and able to take more punishment than any other ground vehicle. The Allies were forced to counter the difference in power through raw numbers, speed and cunning. Unlike the Allied ground forces, the Allied Naval Fleets possessed superior power when compared to their Soviet rivals. The Allies also had Apache Longbows, armed with only anti-tank rockets which were pretty effective against Tesla coils and heavy tanks. The Allies also used subterfuge and high-tech equipment in order to shift the advantage their way. During a war against Giant Ants they used confiscated Mammoth Tanks and grenadier equipment.

In the interwar years, the Allies significantly expanded their Air Force, adding Harrier and Black Eagle jump jets to their arsenal. Also, the Allies began experiments to produce safer, more practical Chrono Technology for military purposes. The Allied core forces still remained fast, efficient, but fairly lightly armed and armored, such as the Grizzly Tank . They continued to deploy numerous inventive and high-tech weapons, such as the Mirage Tank and Prism Technology. Unfortunately, the Allied Navy, though heavily improved upon and still a threat to be reckoned with, was definitely rivaled by Soviet naval reform during the war.

During the Psychic Dominator Disaster, the Allies experimented with heavier, slower weapons, like the Battle Fortress and Guardian GI. They also introduced units like the Robot Tank specifically to counter Yuri's psychic abilities. The Robot Tank is a hovering light tank that is immune to mind control since it has no driver, but it is unable to defeat any other tank in direct combat.

Prior to and during War of the Three Powers, although the Soviet Union still had supremacy on land, and the Empire of the Rising Sun took control of the seas, the Allied maintained domination in the skies and high-tech heavy weaponry.

The bulk of the Allied technology during this era can be described as conventional weaponry (based on bullets, cannons, and missiles). However, thanks to the contributions of Albert Einstein, the Allies had access to these unique and sophisticated technologies:

Since Premier Romanov's sudden aggression caught the Allies completely off guard, much of the Allies' advanced technologies were not ready for deployment until the later stages of the war. Nevertheless, these technologies, mostly developed by Professor Einstein, were instrumental in turning the tide of the war.

Knowing the Einstein's inventions were responsible for the Soviet Union's previous defeats, Colonel Anatoly Cherdenko travelled back in time and assasinted Einstein as the USSR was on the verge of collapse. In the resulting timeline, much of Einstein's inventions, including nuclear weapons, were erased. However, the Allies' technological superiority over the Soviets remained, mostly thanks to a defense contractor named FutureTech.

During The Uprising[edit | edit source]