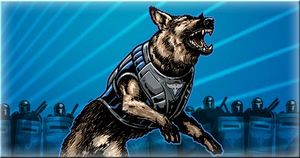 During the War of the Three Powers, Allied Attack dogs are fitted with a modified version of the WP100 Sonic Disruptor in order to improve their effectiveness when facing multiple armed targets. This device amplifies the barks of the Attack dogs, allowing them to stun enemy infantry, paralyzing them for a brief period. This enables the Attack dog to either neutralize their enemies unhindered or retreat safely. However, they can only muster such a bark every so often.