Anatoly Cherdenko (Russian: Анатолий Черденко) was the Premier of the Soviet Union during the third iteration of the Third World War, having been a mere colonel in the previous timeline.

He held the titles of Premier of the Soviet Union and General Secretary of the Communist Party of the Soviet Union, during the War of the Three Powers, giving him a position synonymous with the towering rank of former Soviet leaders Joseph Stalin and Alexander Romanov. He was directly responsible for the outbreak of the conflict by assassinating Albert Einstein with Dr. Gregor Zelinsky's time machine and creating an alternate timeline. His interference in the time-stream was the only way he was made Premier; and so Premier Romanov never came to power, leaving Cherdenko the de-facto leader of the Soviets in his place. This makes him Stalin's actual successor respectively.

Anatoly Cherdenko was a senior officer in the Soviet army, placed to oversee a highly classified military project to develop and construct an experimental time machine. Twelve months later, the Soviet Union was on the brink of collapse, a collapse brought upon largely due to the incredibly costly war against Yuri, and the Premier of the USSR had cowardly fled from Moscow. Cherdenko invited his superior, General Nikolai Krukov, to the Kremlin and introduced him to Dr. Gregor Zelinsky, the scientist who had invented a functioning Soviet time machine. Cherdenko had decided to use the time machine to create a new timeline, in which the Soviet Union had defeated the Allies and became the leading world power. Cherdenko, Krukov and Zelinsky traveled back in time to the 1927 Solvay International Physics Conference in Brussels, Belgium. To Zelinsky's horror, Cherdenko shook hands with Albert Einstein, disintegrating him instantly and removing the greatest scientific mind of the time from the space-time continuum.

Cherdenko, Krukov and Zelinsky returned to the present, in which Cherdenko was now the new Premier of the USSR and the unstoppable Soviet military machine was swarming through Western Europe. Unfortunately, Cherdenko's arrogant deed had catastrophic consequences on the space-time continuum, as Japan had became transformed into a militaristic and technologically advanced superpower known as the Empire of the Rising Sun. Its leader, Emperor Yoshiro, was convinced that it was the Empire's divine destiny to rule the nations of the world.

With Imperial Forces bearing down on the Pacific coast of the Soviet Union, General Krukov, now the de-facto highest ranking member of the Soviet Military, ordered a nuclear strike on the Japanese mainland. Unfortunately for them, without Einstein and his research, there was no nuclear weaponry in existence in the new timeline. As a result, a massive Imperial invasion force advanced across the USSR, unopposed by the confused and disorganized Soviet Army. As the Imperial Army drove deep into Soviet territory, Imperial General Kenji Tenzai mobilized his forces to besiege one of the last few population centres under Soviet control, Leningrad...

Anatoly is a ruthless and power-hungry individual, and a dedicated man to the Communist Party having a natural hatred for capitalists, America, and the Allies. He is arrogant, not standing for others challenging his judgement, with General Krukov being a particular victim of his anger. He is quick to lose temper, and seems to take enjoyment when people risk their lives for the Soviet Union or using them as bait, hinting at possible sadism. He is willing to make an alliance with the Allies in order to betray them and to mess with the space-time continuum more than once just to win a war. His dishonesty was shown in his decision to frame (and kill) General Krukov in order to retain power.

Role in the War[edit | edit source]

Cherdenko is introduced to the Allied Commander as the Empire of the Rising Sun blocks all naval traffic in the Atlantic Ocean by the massive floating fortresses. Field Marshal Bingham allies with Cherdenko to destroy a Japanese naval base in Gibraltar and sink a floating fortress in the North Sea. However, President Ackerman activates his secret super weapon in Mount Rushmore to obliterate Moscow, because he is convinced the Soviets are plotting to betray the Allies. Cherdenko contacts Field Marshall Bingham and announces that he will dissolve the pact between the Soviet Union and the Allies unless the superweapon is deactivated. As the Allied Commander is send to avert Ackerman's mindless attempt to level Moscow, Cherdenko contacts Commander and reminds him with the fact that the Soviets are prepared to attack the United States if the President is allowed to destroy the city. The Commander deactivates Ackerman's doomsday device and eliminates the President, allowing the Soviets and the Allies to launch a full-scale assault to Tokyo, Japan. General Krukov is supposed to arrive with his Soviet armada, but Cherdenko dissolves the pact, forcing the Allied Commander to destroy the Empire's military installations without any reinforcements.

As the Allied perspective progresses, Dr. Zelinsky defects to the Allies and explains Field Marshal Bingham that the existence of the Empire of the Rising Sun and the whole war were caused by Cherdenko, who traveled back in time to change the present. The Commander is sent to investigate Soviet activity in Havana, Cuba, where the Soviets are planning to attack every major Allied city in the world. 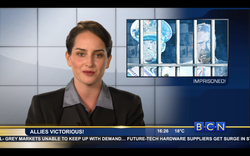 BCN news report on the fate of Cherdenko and Krukov

With unquestionable evidence of Cherdenko's treachery, the Allied Commander is sent to obliterate Cherdenko's fortress in Leningrad and bring the Premier to justice in the operation "The Moon Shall Never Have Them".

By this time however, Cherdenko has gone mad and is planning to escape "the one place that hasn't been corrupted by capitalism, space." The Premier's space shuttle will launch from the fortress in the next 50 (if playing Easy)/30 (if playing Normal)/20 (if playing in Hard) minutes. The fortress itself is protected by General Krukov's elite forces and shielded by seven Iron Curtains, turning it invulnerable to any physical damage. However, the Commander defeats General Krukov, destroys all Iron Curtains and decimates the fortress. Both Premier Cherdenko and General Krukov are imprisoned by the Allies and cryogenically frozen for committing crimes against humanity.

In the Soviet perspective, the Soviet Union is attacked by the Empire of the Rising Sun. Premier Cherdenko orders the Soviet Commander to annihilate the Japanese invasion force and introduces him to General Krukov and Intelligence Officer Dasha Fedorovich. The Commander is placed to defend Leningrad and later Krasna-45, causing heavy casualties to the Japanese forces. Impressed by stunning victories over the Empire of the Rising Sun, Cherdenko sends the Commander to seize a captured naval base in Vladivostok. Supported by the mighty Soviet navy, the Commander drives the weakened Japanese troops from the Soviet territory.

The Soviet Union is saved from utter destruction, but the newly-elected President of the United States, Howard T. Ackerman, promises to push the invading Soviet army from Europe. Recognizing Ackerman as "an ignorant fanatic who wants to wipe us [the Soviets] off the face of the Earth", Cherdenko sends the Commander to capture Geneva, Switzerland and an Allied science laboratory in Mykonos, Greece. However, mysterious assassins attempt to eliminate Cherdenko, but the Premier survives assassination attempt with minor injuries. Cherdenko announces he survived because his grandfather was a cossack, and "we cossacks are not so easy to kill." The Commander and General Krukov are sent to Iceland to destroy the last Allied air base in Europe in the operation "No Traitors Tomorrow". Suddenly, Cherdenko orders the Commander to eliminate Krukov, who was presumably the mastermind behind the failed assassination attempt.

The Commander becomes the next Premier of the USSR who ultimately conquers the United States and defeats the Allies. Dasha confirms to the Commander that Cherdenko, in fact, framed his assassination attempt to have an excuse in killing General Krukov. Dasha suggests that Cherdenko was most likely responsible for Dr. Zelinsky's disappearance.

In the Japanese perspective, it was revealed to Emperor Yoshiro and Crown Prince Prince Tatsu that the existence of the Empire of the Rising Sun was caused by the Soviets who meddled with time and space. Having lost his belief in the Empire's "divine destiny", Yoshiro grants his son the full authority over the Shogunate. Tatsu sends the Imperial Commander to level Moscow and eliminate both Cherdenko and Krukov in the operation "Crumble, Kremlin, Crumble". With the Shogun Executioner and the full might of the Imperial military, the Commander vanquishes General Krukov and destroys the Kremlin, killing Cherdenko in the process. In his final moments, a horrified Cherdenko contacts the Commander and proclaims that he controls time. As the Kremlin collapses, the remaining Soviet forces attempt to save Zelinsky's time machine and use it to prevent the birth of the Empire of the Rising Sun. However, the Commander destroys the device, marking the end of the Soviet Union.