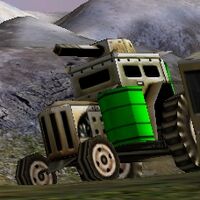 Toxin Tractors have a deadly Anthrax weapon for Garrisons

Anthrax is a disease caused by the bacteria bacillus anthracis, and can be extremely lethal in certain circumstances. Its virulence and relative ease of growth had led to Cold War-era biological weapon trials of Anthrax. Such a weapon is considered a weapon of mass destruction, and the USA, Russia and other major powers have signed the Biological Weapons Convention which outlaws such weapons.

The Global Liberation Army uses an extremely refined strain of the bacteria, capable of causing infection and incapacitation far more rapidly than previously grown strains, and these could be upgraded even further. Anthrax Beta was the typical upgraded form of the bacterium, available to many GLA commanders, but Doctor Thrax had the bacteriologic know-how to increase the lethality even further, creating the strain known as Anthrax Gamma.

The GLA used Anthrax frequently, often opting to include a bioweapons load in their Scud Missiles. In addition, GLA tanks could be upgraded with shells loaded with anthrax spores. Bomb trucks could also be upgraded with an explosive loadout containing anthrax. By far, the most avid user of anthrax was the mad scientist known as Dr. Thrax, who equipped his rebels with an anthrax sprayer instead of assault rifles, redubbing them toxin rebels.

GLA toxins are probably a mixture of various chemicals and biological agents, of which anthrax is a major part. The so-called "Anthrax Bomb", for instance, is probably a mixture of anthrax and corrosive chemicals, as it is able to corrode and destroy light vehicles and tanks. Upgrades such as Anthrax Beta would also "improve" the other chemicals present as well as increasing the lethality of anthrax.

Countermeasures to GLA anthrax varied. Although vaccines were developed, the GLA strains were grown to have different antigens, making vaccines that were over 90% effective on standard anthrax useless. The US did have effective NBC warfare suits, which made American infantry equipped with the suits considerably resistant to anthrax, as well as a fleet of "Ambulances" equipped with detox equipment to clean up infected areas as well as treat infantry who had been affected.

The Chinese had no such countermeasures, as it saw many of its units as expendable. Though, through the use of propaganda via towers or units like overlords, they could strengthen and heal units exposed and increase their chances of survival.