With a nickname like "apocalypse", the Soviet Union's ultraheavy battle tank has certain expectations to live up to. And, unfortunately for the Union's enemies, it does. This monstrosity of a machine, while clearly slower and less maneuverable than the typical modern tank, overcompensates for any of its limitations with two extremely powerful main guns, each one markedly stronger than the main gun on a lesser tank. Even amid all the calamities of war, the choking black smoke and piercing shriek of grinding metal emanating from an apocalypse tank is the stuff of nightmares for combat veterans--including Soviets, who seem to fear the apocalypse tank as much as anyone. 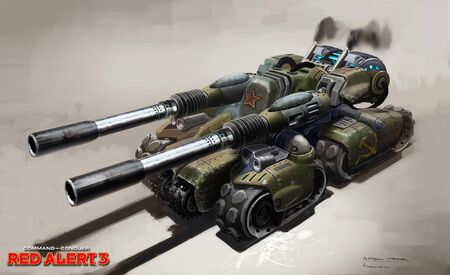 The apocalypse tank is the biggest, most powerful ground vehicle ever constructed, and simply cannot be stopped by anything remotely similar.

On the whole, the Soviet Union is extremely proud of the apocalypse, which is widely featured in military multimedia propaganda, military recruitment mailings, motivational posters found in businesses and classrooms, and more. While a cadre of schoolmasters denounced the naming of the vehicle as an act of fear-mongering, the Soviet government quickly quelled these concerns by insisting that the name was intended to give hope to the people--here is a tank that can withstand anything, they proudly said. The schoolmasters held fast, claiming that the name betrayed evidence of the Union's dissolution into an agenda of mutually-assured destruction with the Allies. They remain incarcerated.

The apocalypse tank even became popularized in a morning cartoon show and toy line ("They Are Not Allies"), at which point it truly became an icon not in the Soviet Union's military arsenal, and all over the world. Such mainstream success is impossible to anticipate completely. However, the corporation responsible for the apocalypse tank, Arkhangelsk Tank Plant (ATP), boldly promised the Soviet regime that the apocalypse would revolutionize modern vehicle warfare by trivializing other, lesser tanks. This proved to be quite true. While the apocalypse tank is very expensive to produce for all its Soviet excesses, it is virtually unstoppable on the ground. 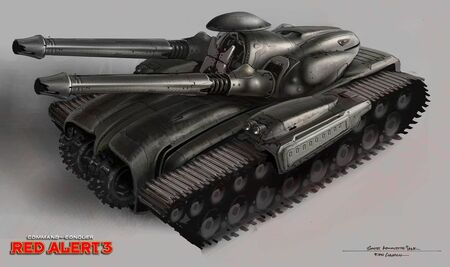 The apocalypse tank design underwent several iterations before manufacturer Arkhangelsk Tank Plant settled on the most fearsome, awe-inspiring version in use today.

The apocalypse is such a massive vehicle that ATP engineers installed a second set of cutting treads into its massive hull, enabling it to simply roll over just about anything that survives long enough to get in its way. To further offset the tank's relatively slow speed is a now-standard magnetic harpoon secondary weapon, one of the first practical military tools based on the Union's continuing research into magnetism. Essentially this works like an industrial-strength grapple that can be used, for example, to tow fast-moving enemy vehicles in closer for the kill--straight into its "meat grinder" chain-treads, which can carve through metal much like their namesake.

For all the fervor, fear, and excitement caused by the apocalypse tank, it is to be expected that the design would draw some disdain. Outspoken critics and foreign protesters of Arkhangelsk's most famous work (with respect to the far more common hammer tank) point to its horrendous top speed, as well as its complete lack of anti-aircraft defenses, or even a simple anti-infantry machinegun post, as evidence of sheer hubris on the part of the apocalypse tank's manufacturers. ATP, in turn, openly brushed aside these claims as "idiocy", announcing simultaneously that the apocalypse tank would go into mass production that same year. At any rate, because of this tank's notoriety, the identities of apocalypse tank crews are kept secret by the Soviet Union. It is difficult to imagine what sort of person would be fit to operate such a weapon, let alone what the experience of this would do to that person.

Battlefield reconnaissance has revealed at least these facts about the Apocalypse Tank: