Surveillance footage of the Apollo Fighter's primary and secondary functions

In spite of the combined treasuries of Allied nations, ongoing struggles against the Soviet war machine have proven undeniably costly. As a result, the Allies have increasingly sought to fill their military with highly specialized and efficient machines that perform exceedingly well in a given role yet work best as part of a combined-arms strategy. One of the finest results of this philosophy is the F-11X Apollo Fighter, born from Stockholm-based Angstrom Defense and now seeing active duty throughout at least a dozen nations. This is one of the world's best, fastest, most dangerous air superiority fighters.

The F-11X Apollo Fighter is the fastest, most dangerous, and (frankly) the only air superiority fighter currently in use by Allied coalition forces worldwide.

Like other Allied aircraft, the Apollo features a VTOL (vertical take-off and landing) engine configuration, which provides maximum stability and maneuverability. This also lets the Apollo operate effectively in urban environments as well as out in the open. The sight of this delta-wing jet hovering in place is almost uncanny at first, yet its triple thrust vectors somehow hold it aloft with near-perfect stability--all the better to let the Apollo bring its 20 mm "Sol" autocannons to bear on any enemy bogies. The Sol is a single-barrel weapon yet can spit out 500 rounds of armor-piercing ammunition per minute easily. Moreover, it is extremely accurate for such a weapon, partly due to the Apollo's own targeting systems and maneuverability. Once an Apollo has marked an enemy target, there is little the enemy can do to escape the Apollo's withering fire, especially because the Apollo can outpace virtually any other aircraft. 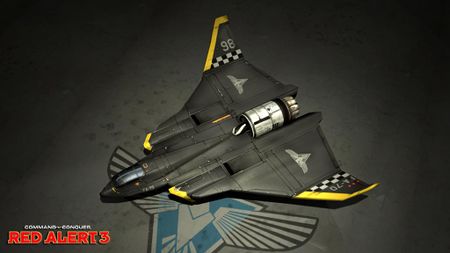 The Apollo Fighter is very direct in its design. For better or worse, it is armed with a more-conventional weapons system than some of the latest, more-experimental Allied vehicles (not the least of which are Angstrom Defense's own Athena Cannon)[1]. However, a little-known fact is that the Apollo underwent several bids and design iterations before the Allies finally accepted the model currently in use. Predecessors of the F-11X lacked the VTOL engine configuration, which made them far more nimble in the skies but also far less reliable and, in the end, less survivable or dependable. The Allies also experimented with fitting a modified version of France's spectrum-dispersion cannon design onto the aircraft, to make it score enemy kills even faster while potentially taking down multiple hostiles in a single brilliant attack. However, the spectrum cannons tended to temporarily blind Apollo test pilots, even through their goggles, which was an unexpected safety concern that Angstrom continues to lament to this day. So this design was ill-conceived, as well as prohibitively expensive. The Apollo model now in use, by comparison, is widely appreciated by for its tried-and-true performance.

Today, Apollo Fighters are a common sight in Allied military bases, and frequently take point alongside close-support or bomber aircraft such as Cryocopters or Century Bombers. They have proven to be absolutely vital to this role, for their unparalleled ability to defend these mission-critical assets. At the same time, Apollos excel at hunting down Soviet aircraft reckless enough to trespass into Allied airspace. The sleek angles of these fighter jets, as well as the age-old romantic allure of air combat--not to mention the necessity of having to fight for one's freedom against the ever-present Soviet agenda of a global communist state--have drawn out many brave men to Allied flight schools worldwide in the hopes of one day being the Allies' next famous fighter ace.

Battlefield reconnaissance has revealed at least these facts about the Apollo Fighter: