The war took a heavy toll on the Empire of the Rising Sun, even in the days when the Empire's ultimate victory seemed certain. Consequently, by the time the Empire's enemies discovered and began exploiting a particular flaw in the Imperial Grand Stratagem, leaders of the island nation could do little to respond. This flaw, of course, was the Empire's overdependence on new, largely untested antiaircraft technology. Exotic dual-form robot weapons and variable base defenses proved somewhat less effective against enemy air forces than the Rising Sun's war ministers guaranteed, and the Allied Nations and Soviet Union were relatively quick to punish the Empire for its hubris. Therefore, by the time the first Imperial archer maiden division was deemed battle-worthy, popular consensus both inside and outside the Empire's borders deemed the effort to be utterly in vain. This type of dismissal only began to subside after the maidens single-handedly brought down a top-ace squadron of Allied Vindicator support bombers scouting the coast of Hokkaido. 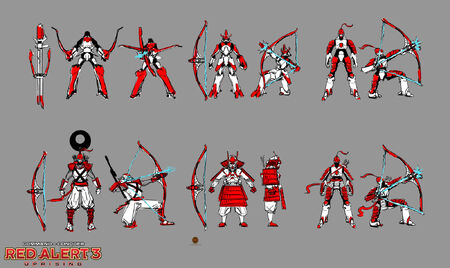 In spite of their humble origins, archer maidens have emerged as among the most inspiring and skillful warriors still willing to bear the Imperial standard into battle.

The women in the ranks of the archer maidens are no strangers to loss and dejection, and likely all share a disposition of drawing strength from such negative feelings. Even as their male counterparts' seemingly-limitless spirit finally began to falter in the face of military setback after setback, the archer maidens' ranks swelled, and the maidens became emboldened to make some sort of difference... even though hopes for the Empire's inevitable victory by then had turned into a palpable sense of imminent defeat. The question is, then, why did the archer maidens choose to take up arms in the twilight of the war?

The simple answer is these women had nothing left to lose. Their husbands, brothers, and friends had perished in the war. And the elite ranks of the Imperial Rocket Angels would not have them, due to restrictions on age, birthright, physical strength, or any number of other factors. According to the archer maidens' Code of Manner, the maidens formed after two female friends rejected from the Rocket Angel ranks returned to the Angels' training headquarters in Hokkaido with their ancestral bows, intending to shoot the Angels' chiefs from the sky. The women on the ground plainly announced their intentions--this was the only way, they said, to make the Angels admit to their pride and their weakness. The Angels' chiefs obliged this duel, and in the ensuing fight, two women died; one held fast to her bow even in death, while the other, an Angel, fell far to the ground with a heavy thud. 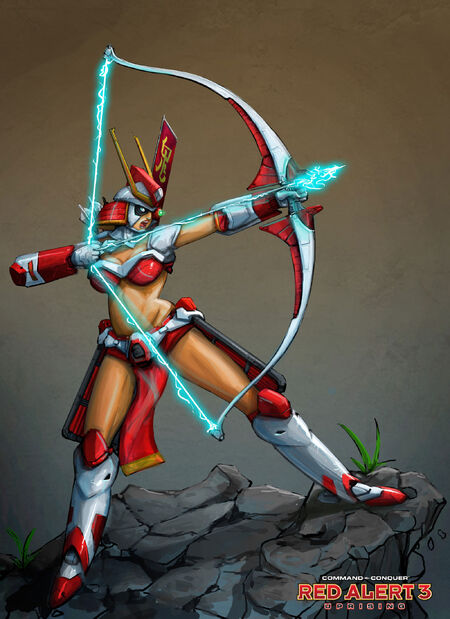 In the hands of the archer maidens, the Sorazatsu Type II greatbow proves more than a match for any other anti-aircraft weapon.

The surviving archer was cast from the Angels' headquarters, exonerated for acting vengefully but in a manner consistent with the warrior-virtues of the Empire. The woman swore an oath of celibacy, vowing to dedicate the remainder of her life to the defeat of the Empire's enemies while welcoming like-minded women from across the nation to unite under that common cause. Alone, she restored a run-down old temple in a particularly mountainous region of Hokkaido, and soon began accepting many other women like her into what came to be known as Shin Kyudo Monastery. There the women trained for months in the art of the bow, while leading a strictly ascetic lifestyle. It took only another year or so for the remnants of the Imperial shogunate to formally recognize the group, and it was then that the archer maidens gained their signature weapons and uniforms, and were invited to join the Imperial military in full status.

This was a humbling moment for the Empire of the Rising Sun, though by now, it was one of many. The archer maidens cordially accepted the shogunate's offer, even though everyone, even the Empire's enemies, knew that the maidens had long since proven themselves in a series of guerilla-style ambushes in the defense of the Empire's northern borders. To this day, the maidens remain committed to protecting their homeland at any cost and to fighting on for the sake of the memories of their loved ones.

Battlefield reconnaissance has revealed at least these facts about the Archer Maiden: