As the Soviet Union further encroached on its neighbors from every direction, the Allied Nations sought a versatile solution to coastal threats that could press onto the shore to secure a beachhead. Years of design conducted in secret, headed by the finest panel of international military vehicle specialists ever assembled by the Allies, resulted in the assault destroyer--an amphibious warship featuring a highly accurate armor-piercing cannon suitable for land and sea warfare, as well as layers of specially-designed armor that can be activated to draw enemy fire away from otherwise-unprotected targets. 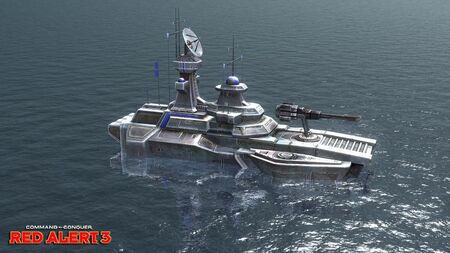 Assault destroyers are state-of-the-art warships expressive of the Allies' growing willingness to take the offensive against the Soviet Union.

Assault destroyers are so massive that only Allied seaports are large enough to manufacture them, even though the vessels themselves are fully as capable on land as they are at sea. In fact, on land, the relative girth of assault destroyers is such that they dwarf most other vehicles, including the Soviet Union's own main battle tanks. These vessels all are fitted with a swivel-mounted armor-piercing main gun, more powerful and no less accurate than that of virtually any modern tank, and their performance characteristics on land rival all but the Soviet Union's own apocalypse tanks. Of course, unlike apocalypse tanks, assault destroyers can traverse land and sea with equal ease, which recently has come into play throughout numerous combat encounters between Allied and Soviet forces near the Strait of Gibraltar as well as near the Allies' science facilities in Mykonos. 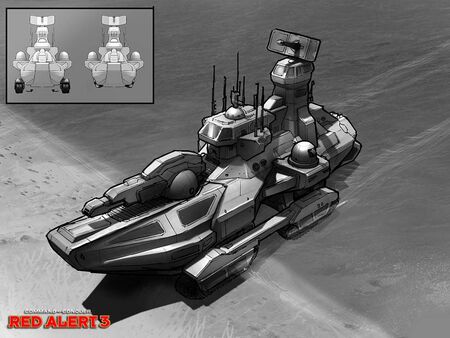 Shown here is a still image of a promotional concept video used to pitch the assault destroyer's amphibious design to the international panel that eventually approved it.

In spite of the assault destroyer's raw power as an amphibious armored assault vehicle, its greatest strength may be its defensive capability. First and foremost, this vessel's reinforced hull can shrug off all but the most violent of concussive blasts--the assault destroyer is probably the single most heavily armored element of the Allied military, rivaling even manufacturer Gerhardt-Giraud's own aircraft carriers. Yet while heavy armor is nothing special to the modern battlefield, magnetically-charged "black hole armor" most certainly is. Each assault destroyer has the capability to activate a special field, which causes nearby ordnance to gravitate toward the assault destroyer instead of its intended target. While purposely drawing enemy fire may seem like lunacy, the assault destroyer's extremely durable hull absorbs most enemy fire as a fine sponge soaks up a spilt beverage.

Assault destroyers' black hole armor makes them probably the single most reassuring sight that other Allied forces could hope to encounter on the battlefield. Even though activating the black-hole armor field means having to avoid use of their main guns for fear of internal combustion, assault destroyers still are extremely powerful when not attacking simply because they can prevent more-vulnerable Allied forces from coming to harm. Thankfully, at least, Allied forces tuned to the same encrypted frequencies as assault destroyers need not fear damaging their brothers-in-arms, and may fire through the black-hole field as normal. After returning from a successful counterattack against Soviet forces in France, one mirage tank commander famously quipped, "Today I love the assault destroyer more than my own mother, and I wouldn't be here if not for her."

Battlefield reconnaissance has revealed at least these facts about the Assault Destroyer: