The Athena Cannon is the Allied artillery unit in Red Alert 3 and Uprising. 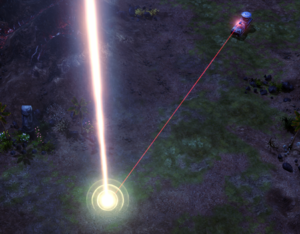 The Athena cannon calls down a proton beam

Created by the Stockholm-based Angstrom Defense,[1] the Athena Cannon is an integral part of the Allied Orbital Defense Network designed by Lydia Winters.[2] The name "Athena Cannon" refers to both a network of orbital beam weapons and their eponymous target-designating vehicles.[3] Unlike traditional artillery units, the Athena vehicle does not attack its targets directly. Rather, it merely designates targets for an Athena satellite in orbit using a target painter, which then fires a powerful proton beam at the target.[4]

Alternatively, an Athena Cannon can order a satellite to fire at its mounted collector dish, allowing it to absorb the energy of the beam and project an "Aegis" energy shield, which protects it and any surrounding units from enemy fire. The shield does not hinder movement, however. And the Athena must remain immobile while the shield is up.

Despite initial controversies regarding its exorbitant development costs, the Athena SatNet proved instrumental in cracking the defenses of the Soviet Union and the Empire of the Rising Sun during the war. However, the limited satellite coverage prevented its wide usage, prompting the FutureTech Corporation to develop an alternative field artillery unit: the Pacifier FAV.[3] 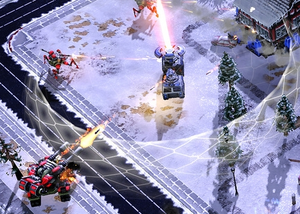 An Athena activating the Aegis during battle to protect itself.

The Athena Cannon is a versatile artillery vehicle. Its Aegis Shield ability can protect nearby friendly units from up to 2000 points of damage. The longer the shield is active, the smaller the area of protection gets. The shield is useful for defense from air attacks, but the unit cannot fire during the time the shield is active. Athena Cannons can target through walls, making them useful for destroying power plants and base defenses protected behind walls.

Once the Athena is in position, it will take 5 seconds to lock onto the target. It is less effective against moving targets, as the beam it summons is stationary. One trick is to make the Athena target a spot on the ground in front of a group of enemies so that the beam strikes them when they move to the spot. This takes good timing, but the beam causes splash damage and can take valuable health off of groups of units.

In groups of five or more, Athena Cannons can destroy any structure or unit, including superweapons, in one strike before the enemy has a chance to react. This is a very useful tactic when attempting to make a quick run at an enemy construction yard or superweapon.

Trying to move when shield is active[edit | edit source]