Renowned for their selflessness, vigilance and loyalty, the canine race have been amongst humanity's closest allies since our respective species first crawled from the primordial ooze. For over fourteen thousand years of human history, domesticated dogs have guarded our homes, scouted our trails and bravely sacrificed themselves on our battlefields in the name of the greater good, asking in exchange for only a warm fire, a comforting word and the occasional hunk of warm flesh on which to sup.

Even today, the surest signifier of inbound Allied forces is the appearance of an Allied Attack Dog, highly trained German Shepherds rendered instantly recognizable by their high tech training collars, matching Kevlar-wool hybrid sweaters and steely-eyed devotion to the Allied cause. This has in turn lead to the veneration of these elite canines as avatars of liberation amongst the downtrodden peoples of our world's less democratic nations - as the old Romanian saying goes, "where Attack Dogs lead, freedom is sure to follow", and indeed it does. 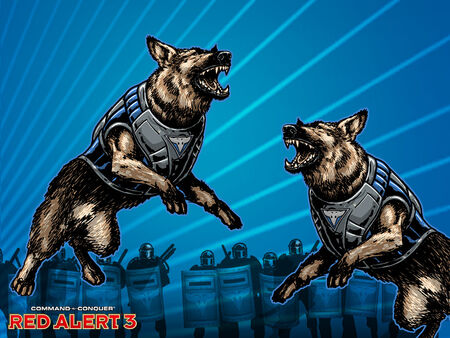 When brandishing their full-sized shields, peacekeepers can easily withstand a hail of enemy gunfire. Shown here is an early design sketch of the peacekeepers' standard uniform.

After the overwhelming success of the now fifty-year-old Canine Combatant Research (CCR) program in Newark, New Jersey, the Allied Council voted to establish a series of seven such campuses across the globe, devoted exclusively to the training of specially bred German Shepherds in the arts of field recon, tracking, guard duty and the various lupine forms of unarmed combat. Upon graduation, qualified attack dogs are assigned to Allied companies throughout the globe, often deep within enemy territory , where their keen senses and razor-sharp teeth have thwarted countless enemy ambushes, saving innumerable lives in the process.

That is not to say that these four-footed soldiers are invulnerable, as any visitor to Newark's deeply moving Memorial to our Canine Fallen will attest. No matter how fast and well trained an attack dog may be, it stands little chance when faced with a fully armed enemy battalion. Despite several disastrous attempts to expand the purview of CCR programs to include armored assault and tactical weaponry as part of their core curriculum - notably the infamous "Scent Activated Smart Bomb" incident of four years ago, which left over fifty dead and numerous others injured - the attack dog remains at his or her best when pitted against a single opponent, whom they can render unmanned with a single, swift chomp to the vitals.

Alongside their impressive physical attributes, the most recent CCR graduate attack dogs have gained a new tool for their arsenal - an adapted version of the same WP100 Sonic Disruptor used by the Allies' controversial Dolphin Scout Infantry. While the adaptation process sacrificed some of the aquatic weapon's killing power, the effect is still more than robust enough to allow an attack dog to leave its enemies stunned and helpless with a single, amplified bark. After a series of unfortunate, highly publicized incidents wherein Allied Peacekeepers were permanently deafened by their over-enthusiastic canine charges, it has been have mandated that all Allied forces be outfitted with specialized earpieces designed to tune out the WP100's frequency.

Battlefield reconnaissance has revealed at least these facts about the attack dog: