The Avatar Warmech was a heavy walker used by the Brotherhood of Nod in Tiberium Wars and Kane's Wrath.

While GDI retired most of its mechanized walkers following the Firestorm Conflict, Nod began to develop its own walkers, solving many of the problems that had GDI engineers scratching their heads. There is speculation that Nod stole the original walker technology from GDI, then took advantage of research in other areas to accelerate the development of new prototypes[1].

The first Nod combat walker was the Purifier, a hulking humanoid robot equipped with a laser cannon and a shoulder-mounted flamethrower. Developed by Marcion's Black Hand, it saw action during the Second Nod Reunification War[2]. By the time of the Third Tiberium War, Nod had developed its second generation combat walker - the Avatar.

Standing at ten meters tall[3], the Avatar, like the Purifier, is a capable all-terrain weapons platform, heavily armored and equipped with a powerful laser[1]. However, it is far more versatile than the Purifier due to its ability to adapt key systems from other Nod vehicles for its own use, though this process kills the crew of the donor vehicle[3].

The Avatar's pilot is enclosed in a "virtual sensory pod" inside the walker[4], which ties the controller to the machine closely. 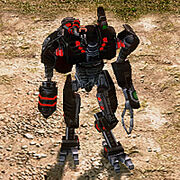 The Avatar comes with a powerful laser cannon on its right arm (based on the Obelisk laser), and possesses the ability to use its claw on the left arm to rip off weaponry and equipment from certain other Nod vehicles, then install the components into its own frame, augmenting its battle capabilities:

An Avatar can upgrade itself using enemy Nod vehicles, gaining power while destroying the enemy unit. In addition, the Avatar Warmech is capable of crushing most other vehicles under its feet, similar to the Mammoth 27 or Annihilator Tripod.

Sometime after 2052, the Nod AI LEGION conducted a critical analysis of the warmech. It found that while in itself a powerful unit, Avatar pilots would impulsively take the weapons of other perfectly functioning Nod vehicles to maintain self-preservation, lessening Nod presence in the area and consequently giving opposing GDI forces the upper hand. The AI found that this created inefficiency, and so issued Nod engineers to later work in developing the next-generation Avatar. The Mk. II version was made available by the time of the Ascension Conflict.

The primary weakness of the Avatar is its susceptibility to aerial assaults, swarms of Anti-Armor Infantry and Commandos, who are capable of planting explosives on an Avatar's legs, which could explain the reason why GDI decided to abandon most of its walker research and technology. Although powerful, Avatars are only capable of using their laser weaponry while stationary, a drawback against mobile targets. However, a simple flamethrower upgrade (which may be used while moving) can partially eliminate the drawback of being bombed by Commandos or Anti-Armor infantry. Another failing is that without any additional weapons, the Avatar often loses against the GDI Mammoth Tank.

Fallen Avatars are repairable by capable engineers, who can reactivate the pilot's virtual sensory pod and rebuild the walker, adding it to the armed forces of the side the engineer was on (a blessing and a curse for the Nod commander). The only requirement is that the engineer must reach the fallen walker before either its power core finally dies down, or a coup de grace is delivered, destroying the fragile husk.

In earlier patches, the Avatar was regarded as the least useful tier 3 land unit. Lacking the Mammoth Tank's firepower and the Tripod's range and shield upgrades, and its own ability to tank equipment from vehicles was typically regarded by most players as too expensive to worth using, particulary since in practice, the Avatar is too slow to take advantage of stealth detection or being stealthed, and Vertigo bombers proved a more cost effective way of dealing with enemy armor. However, in later patches, the Avatar was balanced. Specifically, its cost was reduced (to 2200), its health increased, and its original laser weapon made more powerful. Due to this, the Avatar is currently considered to be both cost effective and powerful.

A bit of a battlefield tip: properly timing multiple Avatars can allow them to share a single vehicle, a flame tank for example.

Interestingly, an Avatar can upgrade itself using weapons from enemy Nod vehicles, although this tactic is mainly effective against enemy Flame Tanks, being the slowest of the four Avatar-compatible units. Additionally, if a vehicle targeted for weapon commandeering is destroyed, an Avatar can still retrieve the weapon from the remains of the vehicle (it only has a few seconds to do this, however, before the wreckage disappears).

When ordered to attack