Battle for Zaire is the 8th mission in the Nod campaign of Tiberian Dawn.

﻿Despite Seth's intentional misinformation and lack of support, his subordinate was able to complete all the missions he had been set. Seth was becoming increasingly threatened by his success. In order to eliminate him once and for all Seth arranged for a suicidal assault of the Pentagon in the USA to be led by him. However Kane found out about Seth's plans and executed him, recalling the forces that he had sent to commit suicide.

Having taken personal command of the promising African campaign Kane had to deal with several pressing matters. GDI forces had began a major three-pronged counter-offensive, as GDI forces landed in Egypt and Morocco in the north, GDI forces invaded neutral Zaire in the south. Faced with major threats on three fronts Nod found itself critically short of manpower and weaponry. Kane decided to send those few soldiers he could spare into Zaire to defeat the GDI invasion.

Knowing they could not defeat the GDI forces directly Nod forces would instead take advantage of a key weakness the GDI had left. In their rapid advance through Zaire they had left many GDI bases virtually abandoned behind the front line. Nod forces would capture two of these bases and would use captured GDI weapons to arm local recruits. In this manner they would eventually assemble an army capable of overcoming the GDI bases near Lodja and Kinshasa. 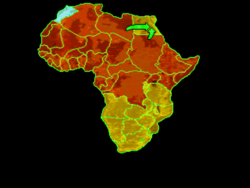 The loss of these bases cut supply lines and brough about the collapse of GDI invasion of Zaire. Zaire President was grateful for the assistance and eagerly pledged the support of his nation and its military to the Nod cause. With Nod territories in the central Africa region secure for the time being Nod forces could now pay full attention to the Nod forces that had invaded Egypt.

﻿At the time, Kane did not want to attack the Pentagon, since the United States' military was too powerful for Nod to battle against. Interestingly, the Pentagon would indeed come under Nod attack in the Third Tiberium War.