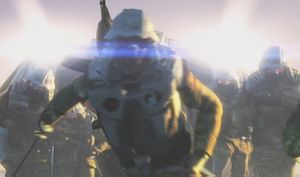 Imperial Warriors are known to use the deadly Beam Katana when executing the Banzai Charge.

Beam Katanas were energy swords developed by the Empire of the Rising Sun and used by Imperial Warriors and Shinobi during World War III, styled after the traditional Japanese katana. Linked to each warrior's rifle's power supply, they can be ignited to become incredibly hot and, in effect, sharper than any steel, rendering any chances of the weapon being ceremonial moot. Shinobi used their own Katana variation, the Ninjato, as a standard melee weapon along with their longer-range Shuriken. Imperial Warriors wielded the Beam Katanas during Banzai Charges. Those who wielded the swords are exceptionally skillful and can use them to kill almost all infantry in one blow, with certain exceptions such as shielded Peacekeepers. The blade was useless as an anti-armor weapon and the user ran the risk of being killed when fighting an Allied Dog or Soviet War Bear due to their ability to kill in one hit.