The Black Guard is the Soviet Union's honor guard, tasked with protecting the Kremlin and Premier Romanov himself.

As a result of the Soviet defeat on Third World War, the Black Guard fought to the end, with no known survivors from their defeat in the course of Allied assault on Moscow. 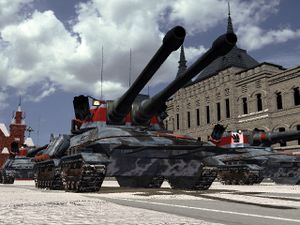 Black Guard Apocalypse Tanks - seconds before being destroyed by a Harrier airstrike.

Defeating them will be a problem, as the tanks are all elites and are protected by standard base defenses. Most conventional tactics, including tank rush, Harrier airstrike and prism tank rush, are extremely difficult to pull off: reasonable numbers of these units will die before even inflicting enough damage to one Black Guard tank.

The optimal tactic, although time-consuming, is to chronoshift the tanks, two at a time, into a body of water to the east, where they will sink. Destroying the defenses is much easier, and can be done either with long range weapons, such as prism tanks, or by destroying the nuclear reactors that power them.

A faster, but costly way is to chronoshift 4+ IFVs with Chrono legionnaires inside. While they die in one hit, they can paralyze the Black Guard instantly, and very quickly erase them if not interrupted. One can also teleport a squad of legionnaires to the outer southern walls of the Kremlin fortress (where the Black Guard nuclear reactors are), and then jump inside (to avoid the vulnerability waiting period).

There is another, much more elaborate strategy to both defeat them and use them to your advantage. To the east of your starting point and your base, there is a small Soviet base equipped with War Factories, Barracks and a Battle Lab. Simply destroy the few Tesla Coils, Sentry Guns and Flak Cannons protecting the base, and capture the Barracks, the War Factory and, most importantly, the Battle Lab. This will allow you to train Yuri Clones. Build a Chronosphere, and chronoshift a Black Guard Apocalypse Tank within the range of your Yuri Clones. When your Yuri mind controls the enemy tank, you will have a nearly invincible, extremely destructive unit at your service. Use it to battle the Soviets through Moscow. Send the Yuri Clone to a protected area and wall him off, to protect him and avoid the potentially catastrophic loss of such tank. You can do this with the four Black Guard tanks, one at a time, to create a very powerful and strong attack force that, if properly managed, can end the battle in seconds.

Behind the Scenes[edit | edit source]