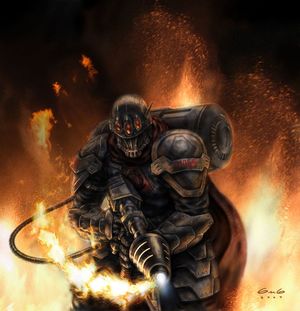 The Black Hand was originally founded as a form of religious police tasked with enforcing adherence to the teachings of Kane. However, the cult later grew to become a powerful and influential religious group that operated mostly in secret. This changed after the Second Tiberium War, when Kane disappeared. A high-ranking member of the Black Hand, Anton Slavik, rose to power within the Brotherhood and revealed himself as a Black Hand prelate.

Many within the Black Hand chafed at the cult's new public profile, including a popular preacher named Marcion, who would come to be the leader of the anti-Slavik faction. This conflict quickly spun out of control, leaving Slavik dead at the hands of an assassin and Marcion and his followers retreating to self-imposed exile in the Australian outback[1].

Within a year of his break from Nod, Marcion had organised his followers into a disciplined theocratic army - the "new" Black Hand[2]. Within this new army, a group of well-trained and loyal soldiers, clad in black heavy armour and armed with flamethrowers[3], came to be Marcion's right hand. These soldiers were feared even within the ranks of Marcion’s forces, and they were often attached to infantry formations to keep order and retain the message of the Word[4].

After Marcion was captured by LEGION, his forces, including the Black Hand heavy infantry, rejoined the Brotherhood[5]. These elite soldiers became the spearhead for Nod's forces, and distinguished themselves because of their superior training, extreme loyalty, and incredible toughness[6]. Black hand troopers also wore capes like confessors do.

Their flamethrowers are good against infantry and structures, but do little damage against most vehicles such as heavy tanks, so the best method of countering them is to use any vehicle with anti-infantry capacity. Furthermore, they are capable of instantly clearing garrisoned buildings. Their flamethrowers are quite effective against light vehicles if under prolonged fire though. With the Purifying Flame upgrade, however, light vehicles and even tanks are at grave risk.

As a note, their flamethrowers deal splash damage - any structure or unit caught in the cone of flame will take also take damage.

Effective weapons against them include most anti-infantry weapons although their heavy armour allows them to survive at least a few head-on enemy attacks. sniper teams, commandos, and Shadow teams are good counters.

Black Hand squads deployed by the Black Hand subfaction are trained as veterans, and can be upgraded with the purifying flame upgrade to increase their damage. Ironically, they are rendered largely redundant by the Black Disciple unique upgrade, which adds a Black Hand member to confessor cabals and militant rocket squads, meaning Black Hand commanders have little need to train separate Black Hand squads.

When ordered to clear a garrison[edit | edit source]

The black hand is one of the few infantry units that wore capes. The other being confessors in rivals and the other confessors in Kane’s wrath.