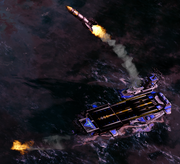 The Blackout Missile is the special ability of the Allied Aircraft Carrier during the War of the Three Powers. When used, the Carrier fires an EMP missile at the designated target, which disables all electronics in a small radius, paralyzing all units and structures for a short period of time, including friendly ones. This ability can be used simultaneously with the Sky Knight drones.

This ability is affected by the High Technology upgrade, which increases its effective radius and duration.

Since the Sky Knight UCAVs have a minimum range, the Blackout Missile can be useful for getting an Aircraft Carrier out of a tight spot. Though agile units may still be able to dodge the missile while it is in flight due to its relatively slow speed.