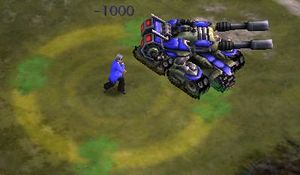 Never let a spy come near your Apocalypse Tanks or else

The Allies in War of the Three Powers know that no soldier is a perfect, dedicated, incorruptible patriot, and that any soldier can be convinced to join the winning side, if the price is right.

Allied Spies go around carrying wads of cash, and are authorised to periodically distribute them to nearby enemy ground troops. Inevitably, when shown the benefits of capitalism and consumerism, they will join the Allies. Even Soviet Apocalypse and Imperial King Oni pilots will undoubtedly be won over. Bribery cost $1000 per use and the Spy will also lose their disguise. Take note that certain units - Bears, Dogs, Commandos - will not be so easily corrupted and cannot be bribed, nor can certain sea and air units.

Since mind controlling does not exist in War of the Three Powers, bribing is the only way to convert enemy units to your side.

It should be noted that heroic units (the highest level of promotion) cannot be bribed.