The United Kingdom, UK, Great Britain, or Britain, is a country located on the British Isles in north-western Europe. The capital city is London. In World War I, the UK is responsible for inventing today's armored fighting vehicle, codename: "Tank".

During the Second World War, the UK was a member of the Allies fighting against the Soviet Union. The UK contributed its well-trained military forces to driving the Soviet war machine from Europe. Notably, British forces had the best armor for their units when compared, respectively, to the other military powers. Also, its capital city made an appearance including one in a major site named Buckingham Palace in the last and final mission of the Soviets where their leader, Stalin was poisoned with tea by Nadia after congratulating his best Commander.

Britain was one of the European nations who rallied to the side of the United States when it was invaded by the Soviet Union. In the Allied perspective, Britain was kept from participating in the war due to Soviet threats to launch nuclear missiles at Western Europe. When the silos in Poland were removed, it began contributing actively to the war effort. British Snipers especially were renowned throughout the Allied forces. The Soviet perspective had Britain sending sniper teams to Russia in Chrono Defense and the USA in The Fox and the Hound.

During the events of the Psychic Dominator Disaster, British snipers were vital in countering Yuri's Virus snipers, and played a key role in taking back the city of Seattle, Washington. Power Play was named as the Allied Commander was sent there. London's Parliament House was the site of an Allied-Soviet alliance treaty against Yuri, where an Allied commander successfully defended Parliament House from Yuri's assaults.

The treaty was signed and then, the Allied veteran destroyed Yuri's base to ruins. Yuri also unleashed the first Floating Disc on this city. In the Soviet story, the Soviets joined with the Allies after a Psychic Beacon was destroyed to re-brainwash the Allied Forces and then the two groups defeated Yuri's base, when the Soviet Union and its World Socialist Alliance including Iraq, Cuba and Libya are on the verge of defeat.

During War of the Three Powers, Britain was part of the Allies and played a key role in the war against the Soviets and later the Empire of the Rising Sun. The news organisation, BCN and defense company, United Armour are located in Britain's own homeland.

The Guardian Tank is Great Britain's main contribution to the Allies. It won against the American-made Grizzly in a competition to see which would be the next Allied main battle tank. Notable personnel inculde Field Marshall Robert Bingham, former RAF pilot Giles Price, Lieutenant Eva McKenna and during the Command & Conquer: Red Alert 3: Uprising are both Rupert Thornley and Commander Lydia Winters.

In Ride of the Red Menace, the Soviets attempted to invade Great Britain - at the time the last free Allied nation left in Europe - at Brighton Beach, but they were successfully repelled by Commander Giles Price and an Allied Commander. The first Allied victory here made Soviet General, Nikolai Krukov to retreat from invading the British Isles and regrouping in France and Germany.

London: A major capital city to the Allies against the USSR. It survived many events against Josef Stalin, Alexander Romanov and Yuri. Also served as a major Command Center to Allied Forces in Europe during the wars with the Soviet Union. In the Soviet mission Soviet Supremacy it was captured by the USSR to put an end to the allies.

Brighton Beach: In War of the Three Powers, Nikolai Krukov was ordered to invade England to end the Allied defeat. The Multigunner IFV from Australia made an outstanding performance here, especially shooting down the Kirovs.

When Tiberium took hold of Europe in the 1990s, the UK enjoyed relative safety from the toxic substance as an island nation with considerably less Tiberium infestation than mainland European countries.

As a former Allied nation and an economically developed state, the UK quickly became a prominent member of the newly-formed GDI, under the leadership of Prime Minister Francis Weatherell. Information recovered from the Sarajevo, Temple of Nod revealed that London's Parliament House was to be targeted for destruction. Adam Locke was appointed Supreme GDI Commander, while both Dariel MacInnis and Nigel Grant were in the First Tiberium War. At the end of Cradle Of My Temple, Kane gave a Nod commander the option of destroying the Houses of Parliament with the hacked Ion Cannon.

During the Second Tiberium War, the United Kingdom housed a secret GDI laboratory that held the test of a Mammoth Mk. II. Kane's second-in-command, Anton Slavik was ordered to delay the project to prevent GDI's testing of the next-generation Mammoth weapon. Nod managed to delay mass production, limiting GDI Commanders to only one Mammoth walker on the battlefield. Following the Second Tiberium War, when GDI classified areas of the Earth according to the degree of Tiberium infestation within them, the UK was designated a Blue Zone as Tiberium growth was still very limited and contained. The UK continued to be a thriving country with a high degree of technological developments.

However, during the Third Tiberium War, catastrophe loomed for this once relatively safe haven. Scrin forces under Foreman 371 viciously attacked the Blue Zone, raiding the capital city of London and destroying a number of historic landmarks like the Queen's Palace and political centers in the area. The UK was left reeling and in disarray as GDI forces struggled desperately to push the invaders back into Red Zones. Fortunately, they eventually succeeded, but countless lives were lost. Furthermore the invaders' destructive assault meant that the Tiberium crystals spread out of their containment deposits.

Thus by 2062, the UK had been overrun by Tiberium and transformed into a Red Zone. The cities of Manchester and London were no exception. In fact GDI's Global Headquarters building bore a green Tiberium stain, whilst Manchester itself was one large Tiberium field. 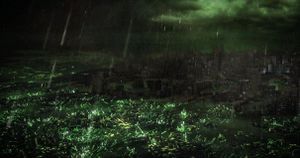 Manchester in 2062.
Retrieved from "https://cnc.gamepedia.com/index.php?title=Great_Britain&oldid=59960"
Categories: