Surveillance footage of the Bullfrog's primary and secondary combat functions

The KDB-2 Bullfrog is an unusual all-terrain assault transport with significant anti-aircraft capability. Kiev-based Kazminov Design Bureau all but clinched its monopolistic role as the Soviet Union's favored manufacturer-designer of military vehicles with this particular model, which has proven itself time and again in more than seven years' worth of fierce combat worldwide. 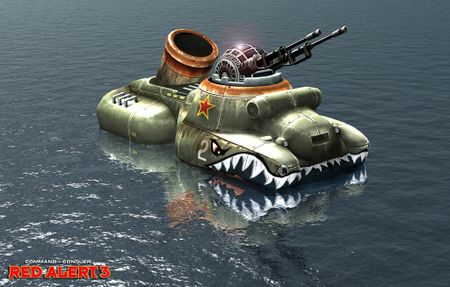 The Bullfrog is an amphibious variant of the obsolete Soviet Flak Track, and features a specialized version of its predecessor's feared anti-air weapon combined with an innovative infantry-launching device: the Hlopushka Troop-Deployment System (part CC98-HTDS), colloquially known as the "man-cannon". As the name suggests, this device is capable of launching a full-grown man across roughly a thousand meters, where he can drop behind the front lines using a basic parachute pack. Year-over-year safety statistics for this unorthodox transportation system continue improving at a rate of 40 percent, which surely would have delighted its inventor, legendary circus ringmaster and patriot Arkady Ilyushin, had he survived the Bullfrog's tragic maiden voyage.

One hotly-debated side effect of the CC98-HTDS is that the air lock used to build sufficient pressure in the firing mechanism means, in practice, that the only way for troops to exit the vehicle during combat operations is for all of them to launch out. After initial field tests, strict rules were imposed that greatly mitigated Soviet conscripts' complaints of whiplash, nausea, acrophobia, or general malaise at having to use this system. Pursuant to new Soviet combat regulations, the Bullfrog now comes standard with accommodations fit for larger passengers, such as trained War Bears and Tesla Troopers. The inside of the cannon is greased to ensure these forces are less likely to ignite from the friction of launch. 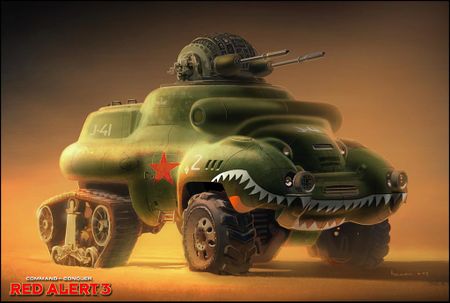 Allied forces have been known to designate Bullfrogs as priority targets because of the danger Bullfrogs' AA guns pose to enemy aircraft. Shown here is an early prototype with no amphibious capability.

Apart from its role as a transport, the Bullfrog features the powerful-if-conventional PVS 5-7 Tucha Cannon, which can track fast-moving aerial targets easily and fill the skies with a hail of metal fragments that can efficiently tear through fuselages and cockpits alike. The vehicle itself is rugged and maneuverable, guarding coastal territories well. Its all-terrain treads drop automatically as soon as the vehicle detects contact with solid ground, which helps make the Bullfrog relatively easy to operate. This, together with the attractive and patriotic standard paint scheme applied to this vehicle, has consequently enticed many Soviet citizens to enlist in the armed forces in the hopes of becoming a Bullfrog pilot. Indeed, Bullfrog operators have been known to be enthusiastic and forthcoming during combat, even under duress. They tend to fill their supporting role on the battlefield with great pride.

Battlefield reconnaissance has revealed at least these facts about the Bullfrog: