Bunkers are defense structures available to both GDI and Nod in Tiberian Twilight.

The Defense Class for both GDI and Nod have access to Bunkers, though they are very different.

Both the GDI and Nod bunkers garrison infantry. Unlike the Foxholes of the Third Tiberium War, both Tiberium Twilight Bunkers cannot be cleared, only destroyed. Also, with the Medical Training upgrade, infantry will also rapidly heal themselves while inside a Bunker.

The differences between the GDI and Nod bunkers lend them to somewhat different uses. The GDI Bunker has 3 garrison slots to the Nod Bunker's 2 slots. When upgraded, both bunkers gain increased armor, but the GDI bunker gains a powerful Chaingun, while the Nod bunker gains the ability to Burrow.

In both cases, it is often advised to deploy Bunkers in pairs with 1 Engineer in each bunker, allowing them to repair each other, as well as any other nearby defense structures. When placed near heavier base defenses like Focus Beams or Obelisks, it may even be advisable to place only Engineers inside a Bunker to provide powerful, rapid healing, and allow the other defenses to do the damage. Last, as an alternative to Engineers, you might use Dozers or Slaves, as long as the Bunker is placed right beside the other structure it's healing, however this makes the entire set of defenses vulnerable to long range area of effect attacks, such as Mastadons, Juggernauts, or Leviathans.

In practice, the GDI Bunker is usually superior. However, when paired with other burrowed defenses, the Nod Bunker can be an important part of a powerful and very unexpected defensive trap. 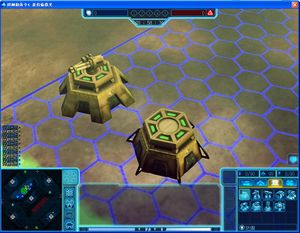