Cairo is the capital of Egypt and the largest city in the Arab world and Africa. Its metropolitan area is the 16th largest in the world.

Egyptians today often refer to Cairo as Maṣr, the Egyptian Arabic pronunciation of the name for Egypt itself, emphasizing the city's continued role in Egyptian influence. Its official name is القاهرة al-Qāhirah , meaning literally "the Vanquisher" or "the Conqueror"; sometimes it is informally also referred to as كايرو Kayro. Cairo has the oldest and largest film and music industries in the Arab world, as well as the world's second-oldest institution of higher learning, al-Azhar University. Many international media, businesses, and organizations have regional headquarters in the city; the Arab League has had its headquarters in Cairo for most of its existence.

Cairo is also in every respect the centre of Egypt, as it has been almost since its founding in 969 AD. The majority of the nation's commerce is generated there, or passes through the city. The great majority of publishing houses and media outlets and nearly all film studios are there, as are half of the nation's hospital beds and universities. This has fueled rapid construction in the city—one building in five is less than 15 years old.

The first city on the site, Old Cairo or Al-Fustat الفسطاط was founded in AD 648 near other Egyptian cities and villages, including the old Egyptian capital Memphis, Heliopolis, Giza and the Byzantine fortress of Babylon-in-Egypt. However, Fustat was itself a new city built as a military garrison for Arab troops and was the closest central location to Arabia that was accessible to the Nile. Fustat became a regional center of Islam during the Umayyad period and was where the Umayyad ruler, Marwan II, made his last stand against the Abbasids. Later, during the Fatimid era, Al-Qahira (Cairo) was officially founded in AD 969 as an imperial capital and it absorbed Fustat.

Slave soldiers or Mamluks seized Egypt and ruled from their capital at Cairo from 1250 to 1517 when they were defeated by the Ottomans. Following Napoleon's brief occupation, an Ottoman officer named Muhammad Ali made Cairo the capital of an independent empire that lasted from 1801 to 1882. The city came under British control until Egypt attained independence in 1922.

Until his death in 1848, Muhammad Ali Pasha instituted a number of social and economic reforms that earned him the title of founder of modern Egypt. However, while Muhammad Ali initiated the construction of public buildings in the city, those reforms had minimal effect on Cairo's landscape. Bigger changes came to Cairo under Isma'il Pasha (r. 1863–1879), who continued the modernization processes started by his grandfather. . Isma'il also sought to modernize the city, which was merging with neighboring settlements, by establishing a public works ministry, bringing gas and lighting to the city, and opening a theater and opera house.

The immense debt resulting from Isma'il's projects provided a pretext for increasing European control, which culminated with the British invasion in 1882. The city's economic centre quickly moved west toward the Nile, away from the historic Islamic Cairo section and toward the contemporary, European-style areas built by Isma'il.

The British occupation was originally intended to be temporary, but it lasted well into the 20th century. Nationalists staged large-scale demonstrations in Cairo in 1919, five years after Egypt had been declared a British protectorate. Nevertheless, while this led to Egypt's independence in 1922, British troops remained in the country until 1956

Cairo was siezed from GDI forces by the Brotherhood of Nod during their first invasion of Egypt and a Nod supporting regime was installed there.  It was recaptured by the GDI some time later before finally being retaken by Nod during their second invasion. 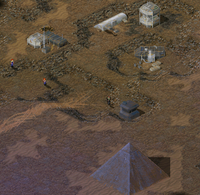 Outskirts of Nod-ruled Cairo during the Second Tiberium War

Eventually, General Hassan gained control of Cairo as he consolidated his power over Egypt, establishing control of Nod before governing as GDI's collaborator. However, when Anton Slavik rose to power and prior to Kane reappearance, Anton Slavik's rebels took Cairo and Kane established his main base there.

The Cairo area housed the World Altering Missile launch facilities which were also Kane's new pyramid and Temple of Nod. It was invaded in a daring raid by GDI commander Michael McNeil, who prevented the launch of the missile along with three ICBMs aimed at what was left of the Philadelphia.

After the end of the Second Tiberium War, a small Nod team evaded the heavy GDI security to retrieve the pieces of CABAL.

However, Nod did not simply let the area go into GDI hands. Instead, after the conclusion of the Firestorm Crisis and rebuilding efforts in Africa, Nod established their rule firmly here and begun construction of a massive underground missile silo complex, which laid masked for many years until the fateful day in 2047, when the silo was activated and a nuclear missile was launched against the GDI orbital command center, GDSS Philadelphia, obliterating it. After this, most of the masking nets and camouflage were removed and all launch operations transferred to a central, raised platform in order to speed up the loading times and launch cycles. The silo used to launch a missile against Philadelphia was shutdown and deactivated.

During the early stages of the Third Tiberium War, GDI invaded Egypt and destroyed the Cairo Nuclear Facility in retaliation for the destruction of Philadelphia. GDI troops razed Nod administrative facilities on the outskirts of Cairo, bringing Nod's long-time control of Egypt to an end.

Following the cataclysmic ending of the siege of Temple Prime, Cairo (and much of Egypt) was hit by the fallout and is classified as the R-1 Red Zone.