Catalyst missile is a support power available to the Brotherhood of Nod in Tiberium Wars and Kane's Wrath. 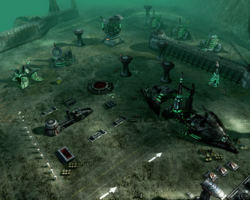 The catalyst missile was capable of detonating Tiberium crystal deposits in a sub-critical reaction. It was one of several Tiberium-based weapons developed by Nod alongside the liquid Tiberium bomb.[1] The missile was specifically designed to exploit the Tiberium-based nature of the Scrin and channel their forces in more productive directions.[2]

Kane showing the catalyst missile to the Nod Commander

After GDI's raid on Nod's research facility in Casabad, GDI scientists discovered evidence of this weapon. However, due to the decentralized nature of Nod R&D efforts, development of the catalyst missile continued unabated despite the loss of the Casabad facility.[1]

The catalyst missile detonates nearby Tiberium deposits, dealing heavy damage to any units caught in the blast. The missile itself does only 500 damage, which is negligible to most units and structures. However, the damage is increased by 50 times against units and structures that contain Tiberium, more than enough to guarantee their destruction. These include:

Despite the visual effect of Tiberium crystals exploding, this power, unlike the Tiberium vein detonation power, deals no damage to Tiberium and therefore CANNOT be used to destroy enemy Tiberium fields.