Surveillance footage of the Century Bomber's primary and secondary functions

As imminent threat of another world war engulfed the Allied nations, military strategists sought to develop preventative measures against Soviet attack. Their plan: to maintain squadrons of long-range bombers in contested airspace literally at all times, such that any Soviet aggression could promptly be countered by bombing runs against high-value Soviet targets. Theoretically, at least, this would make the Soviet Union think twice before overstepping its bounds. Of course, up until recently, the Allies had no aircraft fit for the job, for they needed a long-range bomber with maximum fuel efficiency and good-enough amenities to support an in-flight team for weeks at a time. And after numerous design bids from all around the world, the American-made B2-X Century Bomber emerged as the clear winner, and is now in full production in Allied airbases worldwide. 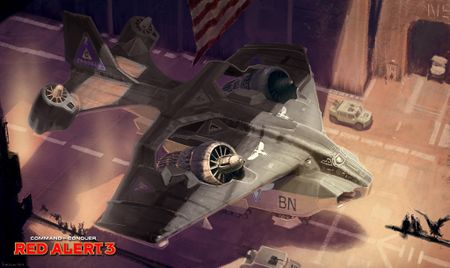 Shown here is an earlier model, whose engine configuration has since been revised for optimal cost-performance. The B2-X Century Bomber is the largest, most durable fighting aircraft in the Allied arsenal.

This wedge-shaped strategic bomber can carry more than enough iron bombs to level an entire city block--or a heavily fortified enemy compound. The Century is also sturdy enough to hold its own in enemy airspace, thanks to a heavily armored exterior. Redundancy and fire-proofing in the engine compartments help make the Century very good at returning to base in one piece. What's more, its large cabin also makes it an effective troop transport, suitable for para-dropping infantry squads deep behind enemy lines. Another of its many advantages versus older bombers is its VTOL (vertical take-off and landing) engine configuration, which facilitates operations in urban environments and speeds ammunition load-out and troop deployment. Note, however, that it still is intended to fly with escort craft, as current models carry no defenses (apart from their bombs) in order to cut weight and costs. 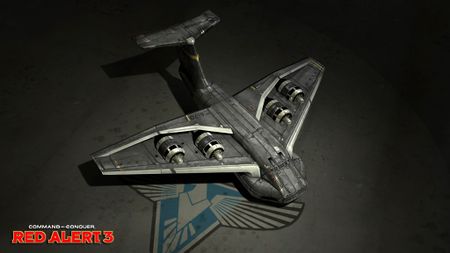 Century Bombers excel at laying waste to armor divisions or military facilities, then para-dropping soldiers in to clean up the mess.

The Century's destructive potential is remarkable, though naturally the craft must return to base to rearm in between bombing runs. It is rumored that the Allies have struggled with this inefficiency, and now are working on a solution in the form of a highly-advanced bomb fit only for a Century-sized aircraft. Such a bomb, it is promised, could cause widespread devastation thousands of times greater than a standard payload, essentially eliminating the need to make multiple bombing runs against a given target. Soviet information ministers note that the Allies likely leaked this information themselves, in a laughable attempt to instill fear, and recently denounced the Century Bomber and these rumors as a "pitiable and unimpressive response to our majestic fleets of Kirov Airships." In truth, the Century bears little resemblance to the Kirov. It is a faster, more tactical craft.

To fly a Century Bomber has quickly become a source of great pride for many Allied airmen, especially those hailing from airbases in the bomber's home state of Texas (where it's affectionately known as the 'Flying Bull'). In turn, Century pilots are some of the best in the world: They're known for being cool under pressure and for bearing the burden of their responsibility with plenty of wry humor.

Battlefield reconnaissance has revealed at least these facts about the Century Bomber: