During the Third Tiberium War, the Tacitus was transferred to this facility from China via sea after a failed attempt to capture the alien device by a Nod strike force led by LEGION.

In 2052, the Tacitus became increasingly unstable due to the experiments of the GDI research team. Fearing that the Tacitus may be destroyed for good, Kane ordered LEGION to attack the facility and retrieve the Tacitus before it self-destructs.

Despite fierce resistance, LEGION's forces managed to recover the Tacitus before its complete destabilization. 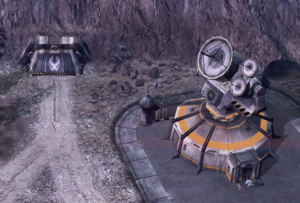 One of the bunker exits and a communications center

The primary defense of the Rocky Mountains Complex was a pair of impregnable energy barriers, presumably derived from the same technology as the Firestorm barrier. The inner barrier protects the Tacitus containment facility itself, and the outer one covers a much wider area, which contains a GDI base. A large number of AA batteries and several Watchtowers are also present within the barriers, in case they fail.

The entire Complex is dotted with defensive emplacements, including AA batteries, Watchtowers, Sonic emitters, and Battle Bases. Several outposts are constructed in strategic locations, and the Complex is constantly patrolled by elite GDI forces.

In addition, a huge army was amassed in bunkers beneath the mountains, allowing them to quickly provide reinforcement through four bunker exits.

Unfortunately, the Complex also has several weaknesses: much of its defense emplacements were powered by poorly defended external power plants, the exits of the bunker were vulnerable to attack, and most importantly, while the energy barriers were physically impenetrable, they were still vulnerable to cyberwarfare. The last weakness proved to be GDI's undoing, as LEGION's forces managed to bring down the energy barriers by hacking GDI communications centers during their assault on the facility.