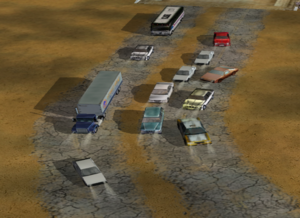 A group of civilian vehicles in Command and Conquer: Generals.

In Red Alert 2, civilian cars under your psychic control (like Yuri), they will not be attacked by enemies so they can be used as scouts. This no longer works in Yuri's Revenge.

In CnC: Generals and Zero Hour, you can use terrorists to take control of cars. You cannot use Nuke Cannons because their neutron shells will only destroy the vehicles.