Cloning in biology is the process of producing populations of genetically-identical individuals that occurs in nature when organisms such as bacteria, insects or plants reproduce asexually. Cloning in biotechnology (in this case) refers to processes used to create copies of DNA fragments (molecular cloning), cells (cell cloning), or organisms.

The term clone is derived from κλών, the Greek word for "twig, branch", referring to the process whereby a new plant can be created from a twig.

The Soviet Union was the first to create cloning technology in WWIII, in the form of the Cloning Vats. These structures enabled a commander to produce 2 infantry units at the price of one from the Barracks, or "recycle" infantries for credits. 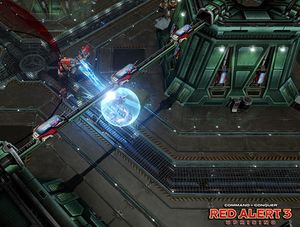 Although the erasure of Albert Einstein at the hands of future Soviet Premier Cherdenko also erased the Cloning Vats, Operation: Barbarians at the Bay of the Imperial Perspective of the War of the Three Powers revealed something truly out of place: there was not one Yuriko Omega, but two - one presumed real, the other presumed a clone, both of these "sisters" were equally powerful.

Closer inspection of the Psionic Decimator Superweapon has revealed 6 chambers that contained what appears to each contain a clone of Yuriko, presumably the source of the Superweapon's psionic power.

What's more, recently declassified intelligence reveals that, Shiro Sanitarium, the facility that originally "created" Yuriko, houses cloning facilities and a large amount of Yuriko clones. According to intelligence sources, all reports of Yuriko Omega sighting during the War of the Three Powers are presumably all clones of the original Yuriko, as the original possesses a much wider range of Psionic abilities than the clones.

Little is known about the cloning facilities inside the Sanitarium, since the research facility was completely and utterly destroyed by the original Yuriko following her escape from Allied custody.

However, the Shiro Incident did not stop the Empire from continuing its research into cloning technology. During Commander's Challenge, the Futuretech Commander encounters Takara Sato, who controls a highly-classified cloning research facility aboard a Floating Fortress. She uses the facility to create a small army of Yuriko Omega clones during battle. The Futuretech Commander also made use of the facility there, deploying a large amount of Commando infantry in response.