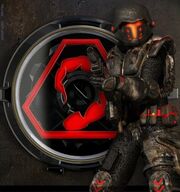 A Nod soldier in combat armor

During the Second Tiberium War, the Brotherhood equipped its soldiers with advanced body armor, superior to the one used by the Global Defense Initiative. The armor consisted of a pressurized body suit, a polymer vest, advanced helmet and arm/leg pads.

The full helmet had a full faceplate with an integrated communications and computer interface unit embedded within the helmet's collar (which could be detached and worn separately), an IR visor and an integrated air filtration system under a polymeric helmet. The design was highly modular and elements could be worn separately.

The vest was composed of advanced defense polymers, protecting the torso and groin with a utility belt integrated into the frame. The vest was complimented by leg and arm pads designed to protect the limbs of the user.

The design proved to be very successful, and with several upgrades formed the basis of Nod body armor technology of the Third Tiberium War. However, these were only granted to advanced nod units, such as the Confessors (together with a fireproof, thermal masking cloak) or Black Hand, while regular Militant typically wore civilian clothing and basic bulletproof vests. Some militants have, however, managed to receive older suits of Second Tiberium War-era armor, though GDI's Tib-War 3 armor seems to outplay it just as it does when dealing with normal militia.