The combat cycle was an innovative GLA vehicle that appeared in Zero Hour. All GLA rebels were trained to ride any one of these speedy motorcycles.

Note: any upgrades applicable to the infantry unit riding the combat cycle are still applied.

Note: To change the driver, click on the infantry unit and then click on the bike, thus ordering him to move to the bike and take the driver's place. The driver can dismount from the bike when ordered to "evacuate", but the bike will be destroyed. 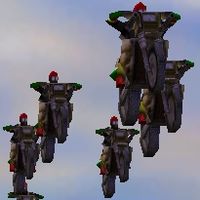 The combat cycle was cheap, fast and able to traverse steep surfaces that other units could not. This made it a superb reconnaissance unit, able to sneak into enemy bases and gain valuable information, especially if the vehicle was ridden by a cloaked infantry unit, such as a saboteur. They were also useful for quick hit-and-run attacks, provided that the GLA commander had the advantage of surprise. Being an "open" vehicle, combat cycle can be used to project nearly all weapon an infantry can handle.

Jarmen Kell could also ride a combat cycle, retaining his stealth and pilot sniping ability, but gaining mobility and protection from Pathfinders. A group of combat cycles ridden by terrorists was used as a small makeshift bomb truck. The combat cycle was also useful for the sneaky insertion of infantry: a worker lost his ability to build while riding on a combat cycle, but he could drive one behind enemy lines, abandon his cycle, and construct a Tunnel Network.

However, the combat cycle had the weakest armour of almost any vehicle on the battlefield. Unlike the technical, which allowed its passengers to survive should it be taken out by the enemy, the soldier riding the bike would perish along with his vehicle if it was destroyed.

Although they were fast, they had poor turning speed, which meant that it needed to slow down in order to go in a different direction. It was, however, able to avoid certain slower projectiles thanks to its speed. It also had no protection against aircraft like the Comanche or the Helix, and was vulnerable to armoured units. They also were incapable of crushing enemy infantry, and could be crushed under the treads of a tank. Neutron shells and Jarmen Kell's pilot-sniping ability could destroy an combat cycle with one shot.

Not all cliffs could be climbed. The combat cycle required momentum and a run-up before being able to climb one. Without enough speed, the combat cycle could become stuck in the hill, leaving it very vulnerable.