Combat engineers are Soviet field support infantry used in the War of the Three Powers.

While few Soviet citizens would be inclined to openly admit it, not everyone born under the Union's banner has the physical strength and coordination necessary to serve in a frontline military capacity. Fortunately, some of these individuals make up for this ineptitude with an overabundance of intelligence. Year after year, the Union's Science and Information Ministers do an excellent job of identifying such people and encouraging them to join the ranks of the combat engineers. While Soviet combat engineers cannot be depended upon to fight firsthand, their technical aptitude and variety of useful battlefield skills makes them a cornerstone of the Union's military engagements.

Combat engineers hail from all walks of life: they are the Union's bookkeepers, professors, curators, symphony conductors, mechanics, shipwrights, and, of course, its civilian architects and engineers. Once drafted, combat engineers receive on-the-job training in control systems, computers, sabotage, and even basic marksmanship for self-defence. Because they are not frontline fighters to be thrown straight into harm's way, they are expected to work longer hours than the average conscript, and for a lower stipend and less in the way of rations, shelter, and amenities. Combat engineers therefore have little spare time to rationalise their trade-off, which Science and Information Ministers explain away as a "noble sacrifice for the good of our Land."

Irrespective of their work conditions, combat engineers are undeniably skilled at what they do, and even seem to take some pride in their work. They can capture enemy installations with remarkable ease, or restore Soviet facilities to a (relatively) pristine state in short order. Notably, the number of catastrophic accidents involving Soviet super-reactors continues to drop year upon year after a stern memorandum from the Ministry of Experimental Science ordered combat engineers to focus on maintaining the Union's facilities rather than competing with one another to set new monthly records in Allied military structures captured. Indeed, if combat engineers have any sort of endemic problem in their ranks apart from their generally poor physical conditioning, it must be their dismissive attitudes toward their responsibilities. Many of these men are somewhat insubordinate, and known to walk a very thin line between sharing meals with conscripts like proper soldiers, and smelting flak pellets in the gulag.

The Ministry of Experimental Science believes its combat engineers to be among the most well-taken-care-of members of the Red Army. They are issued knapsacks large enough to carry most of their worldly possessions, as well as hats to protect against weather. They are even rewarded with ceremonial shovels once their mandatory training is complete, as well as rubberised inflatable sputterboats that they can use for amphibious operations or the occasional day of rest. Apart from their worldly possessions, combat engineers had none of these other things under earlier regimes, points out the Ministry. Only men tend to be selected for combat engineering work, out of respect for traditional labour boundaries. Because combat engineers, by default, are unsuitable in conventional military roles, these men typically skew older as well as wiser than the average Soviet combatant.

Combat engineers were often used to classical capture tech structures such as Oil Derricks, however they had one important role during the War of the Three Powers.

In operation The Unfathomable Fortress, the Allies (allied with Soviets) had to disable Wave-Force towers, protecting path to the Radar boat. Combat engineers, protected by Tanya, captured Imperial Generators to disable electricity to the towers.

In the Soviet campaign, Combat engineers (and their guns) were used to "persuade" Swiss banks to support the Soviet campaign throughout the world (operation March of the Red Army). Despite their weakness in combat, they proved to be adept bank-robbers, holding up the Swiss bankers with their revolvers and forcing them to "put money in bag".

Later, Combat engineers were used in a secret lab on Mykonos (operation The Science of War), to extract information about new Allied research. In the mission "Blight on Big Apple" they captured the New York Stock Exchange building.

Battlefield reconnaissance has revealed at least these facts about Combat Engineers: 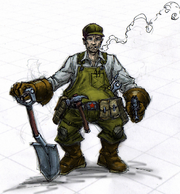 • Capture-and-hold -- Combat engineers are frequently used to capture enemy facilities, which they accomplish instantly just as soon as they manage to get inside. Combat engineers spend years and years training to accomplish these procedures swiftly.

• Armed and dangerous -- Rather than discard a previous generation of side arms, the Union gave them to its combat engineers so that these men could feel better about themselves, and so they had something to do in their spare time. Combat engineers' revolvers are crude but effective in some situations. They notably have very high damage for low rate of fire- combat engineers may kill enemy infantrymen in one hit on occasion.

• Bunker-building -- That shovel gifted to each combat engineer is not purely ceremonial after all, for these tools can be used to quickly set up a bunker with room enough for several of the Unions' finest foot soldiers. As combat engineers do not have the raw supplies needed for these bunkers, they are authorized to file expense reports directly in the field.

• Sputtering on the high seas -- Combat engineers each have a collapsible personal boat that lets them travel at sea as readily as they can trudge about on land. Naturally, most combat engineers tend to prefer traveling in this method.

The Combat Engineer's pistol is somewhat useless and he will still lose in a one-on-one fight against any combat unit in the battlefield. Also in the missions March of the Red Army and Blight on the Big Apple, the Combat Engineer single-handedly captured Swiss Banks and the New York Stock Exchange without any resistance. This is strange, for the Engineer only wields a pistol.