Unlike previous C&C expansion packs, both campaigns have FMV briefings for all missions. It is also notable as the first game in the franchise where both singleplayer campaigns — GDI and Nod — are canon, occurring simultaneously and forming one connected storyline. In previous titles, only the ending for the "good" side (GDI/Allies) was considered canon. This approach would not be repeated until Command & Conquer 3: Tiberium Wars.

With the apparent death of Kane, the Brotherhood of Nod fractured as the generals of the Inner Circle each vied for power and Anton Slavik, Kane's right-hand man, struggled to maintain control. Meanwhile, even though the Global Defense Initiative has won the war against Nod, they were losing the war against Tiberium, which continued to spread unchecked, poisoning the Earth. To make matters worse, the mutant antigen developed by Tratos and tested on Umagon turned out to be a failure, and the latter was driven insane by her mutation.

Tratos believed that the solution to Tiberium could be found in the Tacitus, the alien data matrix vital to Kane's plan. However, as GDI forces were transporting the Tacitus to Tratos' compound for translation via the Kodiak, a massive ion storm caused the Kodiak to crash and cut off GDI forces worldwide from their headquarters, the space station Philadelphia. In response, General Paul Cortez at Southern Cross assumed command of global GDI forces and formed the Firestorm Taskforce. The taskforce successfully recovered the Tacitus from the Kodiak's wreckage.

In order to reunite the Brotherhood, Nod recovered CABAL from GDI and threw their forces into disarray by luring Tiberian creatures to attack their civilian settlements. As GDI forces scrambled to restore order in multiple sectors, Nod forces assassinated Tratos on CABAL's orders. Tratos' death was a major blow to GDI, as it not only severely damaged the relationship between GDI and the mutants, but also rendered them unable to translate the Tacitus. Time is running short, as GDI scientist Dr. Gabriella Boudreau predicted that the Earth's atmosphere will be 100% toxic to humans in less than a year. To speed up the Tacitus research, and with it the process of Earth's recovery, GDI decides to capture CABAL.

After capturing what they believed to be CABAL's core, GDI forces recovered a missing segment of the Tacitus based on CABAL's intelligence, only for the AI to reveal that it has been manipulating both them and Nod in order to complete the Tacitus. CABAL declared its intention to exterminate all of humanity as its cyborgs slaughtered both GDI's Daedalus Team scientists and Nod's Inner Circle generals. GDI destroyed the CABAL core in the Daedalus lab, but it turned out to be merely a remote controlled terminal.

CABAL's cyborgs captured civilians and soldiers alike, and converted them into more cyborgs. While GDI focused on evacuating its civilian population, Nod launched a desperate attack on CABAL's core. However, the core was yet another decoy, and CABAL devastated Nod's strike team with missile strikes.

With both GDI and Nod exhausted. Cortez and Slavik were left with forced to declare a temporary alliance to take down CABAL. GDI forces attacked CABAL's cyborg production plant while Nod destroyed one of its major Tiberium harvesting operations. Finally, the two factions pinpointed the location of CABAL's true core after sharing their intelligence. During the joint assault on its heavily defended core, CABAL unleashed the Core Defender, a nigh-invulnerable giant walker. However, it was defeated in the end, and its core was destroyed.

GDI captured the complete Tacitus from CABAL, which gave them a vast wealth of knowledge. Meanwhile, the reunited Nod celebrated their victory with Slavik as their undisputed leader. However, unbeknownst to both GDI and Nod, Kane remained alive, albeit in stasis, inside one of the hidden bunkers storing CABAL's organic components. It was implied that what was left with CABAL merged with the consciousness of Kane. 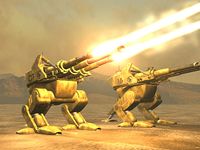 Firestorm adds new campaigns for both sides, both of which are canon, and which occur simultaneously. The game's executable has been modified to run both Tiberian Sun and Firestorm by choosing either game upon running. New units for both sides have been added, including:

Juggernauts fire three rounds instead of one and can be received at the start of a multiplayer game, unlike the Nod Artillery. The Artillery is also reported to have an undocumented precision reduction. Jump jet infantry has been refitted to spot stealthed units.

The expansion pack also added a new turn-based mode called World Domination Tour, later brought to Red Alert 2 and Yuri's Revenge. It was only playable through Westwood Online, while its successor XWIS lacks the necessary code.

Firestorm, along with Tiberian Sun, has been made freeware by EA in February 2010. The freeware release was based off the version built into The First Decade. Due to an error, the modified executable is unable to read movies03.mix, which holds the Firestorm-specific cutscenes in the regular CD release, and all Firestorm cutscenes were ported to movies01.mix along with vanilla Tiberian Sun GDI cutscenes, hence the noticably higher size of the latter file.