Command & Conquer 4: Tiberian Twilight[1] (abbreviated C&C4) is the final game set in the Tiberium Universe and is the direct sequel to Command & Conquer 3: Tiberium Wars and Kane's Wrath. The game departed from the standard RTS gameplay of most other Command & Conquer titles, removing conventional base building and utilizing mobile bases in the form of Crawlers. The gameplay focuses on fewer specialized units, resembling a real-time tactics (RTT) formula.

Tiberian Twilight came out of the Command & Conquer: Arena project, which was supposed to be a multiplayer-only spin-off for the Asian market, by forceful decision of Electronic Arts, which was a controversial decision even within Electronic Arts Los Angeles.

By 2062, global Tiberium contamination reached critical levels; GDI's contemporary abatement technology has become ineffective. With the threat to the Earth and mankind too great, even for Kane, to ignore. Meeting with GDI leaders in Manchester, UK on 27th July, Kane proposed a cooperative venture which was controversial for both sides. Using the Tacitus as leverage, Kane revealed that he had developed a new system, dubbed the Tiberium Control Network, to control and harness Tiberium, however only GDI had the resources necessary to construct it. The situation was too dire for GDI to decline, and GDI and Nod formed an uneasy alliance.[3]

The Tiberium Control Network Conflict broke out in 2062 between Nod Separatists and GDI. By 2073 GDI defeated the separatists with their new weapons, the crawlers.[4]

After 15 years of restoration work the Tiberium Control Network was a success, and the crisis averted; however, the uneasy alliance between GDI and Nod eventually fails leading to the Fourth Tiberium War and the start of the game.[3] 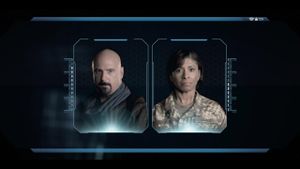 The player is forced to choose a faction.

The game leaves the Tiberium story-line open ended, with Kane's motives and objectives remain obscure with him wanting to use the tower, and humans to activate it.

The player may choose whether they will follow Kane or GDI rebel leader Colonel Louise James.

A GDI Offense Crawler in combat with its Nod counterpart. 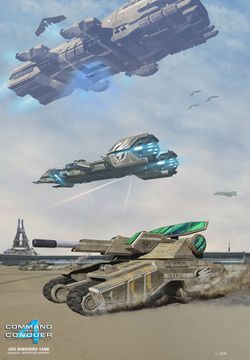 Both Nod and GDI are divided into three "classes", each of which has its own selection of unique units. The classes share only very basic units, such as the engineer.[4]

A player can switch classes if their crawler has been destroyed or by self-destructing it,[5] which can help outmaneuver an enemy.[6] Some upgrades, such as tech levels, persist between class switches.[5]

The Offense class has a strong focuses on frontline combat units and upgrading those units. Most of the offense class units are vehicles, be it light or medium armored. The only exceptions are the engineer, which is universal to all classes, and the commando for GDI and cyborg commando for Nod.[7]

The Defense class focuses on defensive combat and has many infantry units in powered armor.[7] Defense produces fewer units, but infantry are as powerful as light vehicles (due to GDI powered armor and Nod cybernetics, garrisoning and transports) and Defense has powerful defensive structures[8]—only the Defense class can place structures—such as defensive turrets, stealth-field generators, laser cannons,[7] tunnel networks, shield generators, outposts, bunkers, and superweapons.[9]

Defensive turrets should be carefully placed. The GDI rocket turret, for instance, can fire on enemies that a nearby turret can see.[9]

Most structures are created instantly when production is completed, allowing a defense player to instantly reinforce any deployed ally across the map.[10]

The Support class has a variety of powers to augment the other classes, including a wide array of aerial units. This class' focus should be on the "Supporting" of allies in destroying crawlers, capturing TCN Nodes and collecting Tiberium, in order to be victorious.[4]

Support has access to support-powers.[7] These recharge more quickly when in combat or actively healing.[10]

The support crawler can produce some ground units, including tanks.[5]

Traditional base building is replaced by the Crawler, a single, mobile unit that fulfills the base's role. Each Crawler is class specific.[4] The only class that can build traditional bases like in previous C&C games is the Defense class.[11]

Outposts can be constructed by "builder units" in the world. They are highly vulnerable during construction, but provide a build radius (other than what the crawler provides).[12]

There are many options to repair units; crawlers are capable of this.[13]

Most, if not all, infantry are in power armor or cybernetic. This is to make them more competitive against vehicles and, possibly, also to make them larger and easier to see. They no longer form squads.[14] Infantry cannot be crushed by larger units.[13]

Flaming weapons will always set fire to the ground. Damage dealt depends on how many patches are on fire.[9]

Few units have stealth detection, and even if a burrowed unit is detected, it enjoys bonus armor, while a stealthy unit still enjoys a dodge bonus (increased chance of a shot missing it).[9]

Units can still reverse move. Most do so at regular speed, and those that don't have some other advantage, such as cliff-jumping.[15]

Air units reload in different ways. The Vertigo and Firehawk are very fast; they reload slowly, but much more quickly in the presence of a crawler, and don't need to dock to do so.[15]

When an air unit is destroyed, it crashes to the ground, dealing damage.[5]

Units can be "decommissioned" to get back command points; however, if they are killed while being decommissioned, the enemy will get double XP for that.[13]

A variety of neutral structures are available for capturing, as well as long-range cannons, and one which grants a forward deploy zone.[6]

Units can be upgraded to miss less often.[15]

To make Tiberian Twilight's damage and armor system intuitive and easy to learn the developers have added visual cues so that a unit's armor, competencies and whether it is doing "optimum" damage can be seen at a glance.

By looking at a unit's weapon you can tell what armor types it is most effective against. The armor types include Light, Medium, Heavy and Reinforced. The weapon types are:[16]

To further emphasise this all weapon shots will be color coded to show whether or not its being used against it's optimum armor type (see above). All GDI weapons produce blue shots under normal circumstances and pink shots at optimum. Meanwhile, All Nod weapons produce red shots under normal circumstances and orange shots at optimum.[17] Judging from screenshots this doesn't apply to flame weapons, probably because flames are already highly visible making such a distinction pointless. Nonetheless, when several patches of flaming ground overlap they explode in a blue fireball.

Also, you can guess a unit's armour by its size since similarly sized units have similar armour.[18]

Each side has two different campaigns: one single-player and one co-op.[4] Tiberian Twilight's multiplayer revolves around 5-on-5 objective based skirmishes, along with traditional skirmish being an option.

Tiberian Twilight was released to mixed reviews and received lower scores than all its predecessors.

One of the most criticized aspects of the game is the new gameplay mechanism, which completely eschews the base building and resource gathering aspects of previous titles, as well as forcing players to unlock much of the in-game arsenal. The plot of the game was also received negatively.

The digital rights management software included with the game, which requires the player to be online at all times and which will lead to a loss of progress if the connection is lost, has also been a source of criticism.

The game's subtitle was determined by the "Name The Game" competition in the summer of 2009, where fans sent the developers their ideas. The final subtitle, Tiberian Twilight, was revealed at CommandCOM 2009.