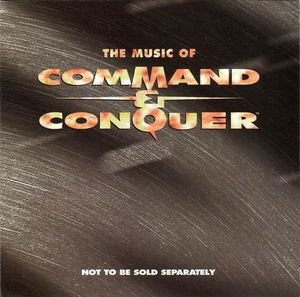 This is the complete list of all tracks from Command & Conquer (1995) and The Covert Operations. They were composed by Frank Klepacki.

Command & Conquer was the first video game produced by Westwood to feature digitized recordings as music, as opposed to MIDI music.[1] The 22kHz mono tracks were produced using an ASR-10 sampler, a Roland S760 sampler and a Roland JD-990 synth module.[1] Klepacki has credited influences from dozens of artists, including Peter Gabriel, Pink Floyd and Nine Inch Nails, in the production of the soundtrack.[1] Klepacki stated he wrote the songs in "batches", each with different themes. Songs such as Prepare for Battle were written in an orchestral style, while others such as C&C Thang touched on Hip hop, and tracks like Deception went towards the Metal genre.[1] Certain songs such as the never-released Hold on, described as "a chilling art piece in the style of Laurie Anderson", were cut from the game because they did not fit the style Klepacki was aiming for in the overall soundtrack.[1]

For the Covert Operations expansion pack, Klepacki was asked by the game directors to compose more ambient-sounding songs.[1]

Many of the tracks feature quotes from movies and music. The tracks "No Mercy" and "Deception" contain quotes of the character Chuck De Nomolos from the film Bill & Ted's Bogus Journey, "In Trouble" contains quotes of Maverick from Top Gun and the track "I Remember Now" from the Queensrÿche album Operation: Mindcrime, and "Enemies To Be Feared" contains quotes from the film "Apocalypse Now". Frank Klepacki has stated that the used samples were all re-recorded in-house, without use of the original copyrighted material.[1]

A lot of these samples were stripped from the final in-game versions on the PC version of the game. With the release of the soundtrack album, many of the tracks were thought to have been updated to include these vocals, but they were confirmed to actually be the original versions of the songs.[2][1] Apparently, some people thought that the vocal tracks could conflict with the voice sound effects in the game, especially since they contained the same voices as the in-game computer guide voice.[1] This decision was apparently retracted later, since all console ports of the game contain the original unmodified tracks.

Some tracks in the original tracks listing have names that do not correspond to the names used on the soundtrack and on Frank Klepacki's own website. Such alternate names are mentioned between brackets. The first mentioned name in this list is always the listed name as it appeared in the original unmodified game.

Tracks with a second length between brackets are those that have alternate versions available. Most of these alternates are the original versions without stripped vocals, as mentioned above. A lot of these tracks were included in the DOS version of the game, and some more can be found on the game's console releases and on Frank Klepacki's website.

The alternate tracks included in the DOS version are accessible in the original game by adding the hidden ini-option Scores=remix in the [Options] section of the game's configuration file conquer.ini. The unofficial 1.06 patch changes the option to a simple on/off option (removing the need for the special keyword "remix"), and offers it as toggleable setting in its configuration tool.

The unofficial 1.06 patch adds an additional track to this; an unused credits track called "Outtakes", which is a remix of "C&C Thang" with audio bloopers from the FMV recordings mixed into it. The track was taken from Frank Klepacki's website, and is only played as score screen music after the final mission.

The Music of Command & Conquer is a soundtrack album containing musical tracks from the video game Command & Conquer, composed by Frank Klepacki and produced by Westwood. It was originally released in 1995. The soundtrack contains 22 tracks, with a combined duration of approximately 72 minutes. It contains tracks from both the original Command & Conquer and the expansion. Though it was never released through retail, Westwood Studios sold this official soundtrack by special order through its website and in game catalogues,[3] and bundled it with some of the game's collector's editions. The album was packaged with a simple brushed aluminium design and featuring the official Command & Conquer logo.

The original soundtrack can be listened to on the web site of composer Frank Klepacki, along with various cues that were cut from the game, most of which are also present on the discs of the DOS version and the expansion pack.

The tracks featured on the official soundtrack CD are the original versions, without the voices stripped. The only exception to this is "To Be Feared", which was always a completely hidden track in the original game. 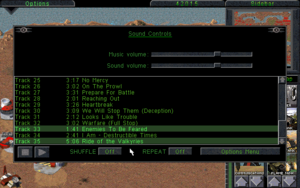 References to the movie Apocalypse Now