Surveillance footage of the Conscript's primary and secondary combat functions

In the Soviet Union, military service is understood to be a rite of passage, for boys and girls alike, into a patriotic adulthood. And, much like the onset of age, this rite is not optional. Opportunities do abound, and based on a child's scholastic achievement and parentage, he or she may end up serving either behind a desk or behind a machine gun for the glory of Russia and all her sister republics. Among the entirety of Soviet youth entering the armed forces, a large percentage consists of boys of unremarkable strength, intellect, or pedigree. These boys, once properly trained and equipped, are boys no longer: They are conscripts. 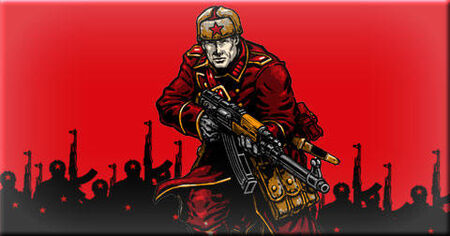 Drafted by the millions, conscripts are conditioned from a very young age--long before their conscription, in fact--to believe in the inevitable victory and greater glory of the Soviet fight against its conniving enemies. Conscripts are also promised handsome rewards upon completing tours of duty, which is all the more reason why they approach what turns out to be a nearly suicidal undertaking with an almost-giddy enthusiasm. Though poorly trained, they are armed with high-caliber assault rifles, as well as satchels filled with a highly volatile, cheaply-produced concoction that's serviceable as a basic thrown explosive. Reports of conscripts drinking this substance for pleasure, and subsequently falling ill or dying, are described as patently false by the Soviet media.

The Soviet Union is famously proud of her "highly efficient" conscript training program, which is centered on a series of mandatory training videos that educate conscripts on how to properly fire a gun, salute high-ranking officials, cry out authorized Soviet war cries, and more. (Note that conscripts are never taught to swim, allegedly out of desertion risk.) Exit polls suggest conscripts come away from this video series genuinely inspired and enthusiastic for combat, and the few that are unsatisfied typically are sent to the gulags straightaway. Conscripts also are especially grateful for how soon into their training they get to brandish the notorious ADK-45 assault rifle, a cheap and effective burst-firing weapon that can easily take down unarmored targets. In addition to their brief marksmanship training, conscripts learn to properly mix and throw explosive Molotov cocktails, named for the great Soviet bartender who first invented the concoction in exasperation when his patrons refused to leave his establishment. On the whole, conscripts are quite accurate with these thrown weapons, which can cause a significant amount of harm against structures or targets too slow to avoid the attack. 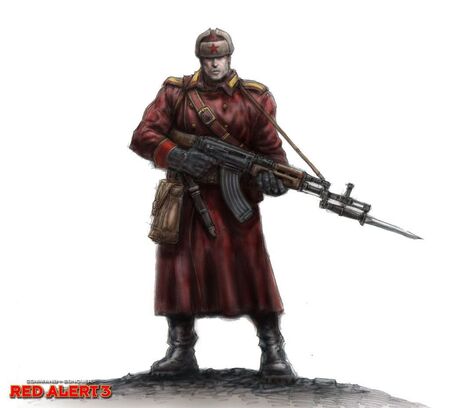 What they lack in skill and training, conscripts make up for (to some extent) with respectable firepower.

It must be repeated that conscripts have the shortest life expectancy of virtually all Soviet forces, and rarely live past the age of 26.6 years before being killed or promoted. The Union depends on her many millions of ill-informed citizens to swell these ranks, and then, in practice, allows them to head straight into the arms of slaughter. Some critics have theorized that the Union purposely seeks a high casualty rate among conscripts so that there are fewer veterans who can return to the homeland to contradict the extremely positive career outlook presented to prospective conscripts in the well-crafted training videos. Russia has incarcerated as many of these critics as she can get her hands on for slander, libel, or treason.

Battlefield reconnaissance has revealed at least these facts about the Conscripts: