The unit referred to only as "Crazy Ivan" is a Soviet demolition infantry unit in Command & Conquer: Red Alert 2 and Yuri's Revenge.

These skilled, obsessed and insane bombers were shown to have quite a liberal attitude to their art, and they are able to strap bombs to nearly anything: they were seen strapping bombs to enemies, strapping them to their own soldiers (presumably so the soldier could charge forward into the enemy lines when the bomb goes off), and they were even seen putting bombs on passing cows. They apparently gained immense pleasure from the sound of an explosion.

During the second iteration of the Third World War, the bombs entrusted to these psychopaths were improved enough to destroy war factories and ore refineries, making them much more valuable.

Crazy Ivans were not known to be employed during War of the Three Powers. Presumably, the Soviet leadership considered them too dangerous. 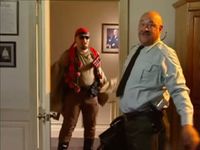 General Ben Carville had just finished briefing the Allied Commander before he was sent to the Black Forest in Germany. As he opened the door of his quarters, an assassin was waiting for him with some explosives hidden under his trenchcoat. Carville was unfortunately unaware of the assassin as he said a final goodbye in German as he was killed by the explosion.

Crazy Ivans are willing to strap a bomb to anything, including their own forces. Once explosives are attached, they will go off and deal heavy damage in medium radius after a short time. If a unit or a building with explosives is destroyed, the bomb detonates immediately. A Crazy Ivan cannot attach explosives to themselves, but can do so to each other. An Engineer can safely remove explosives with a single touch. Note that a unit cannot detonate if inside a transport (will explode immediately after disembarking instead).

Russian commanders with large sums of cash can use attack dogs produced in massive numbers as suicide bombers - once close to a base, Crazy Ivans could place bombs on about 1-3 attack dogs and send the dogs to rush the target (due to dogs' speed, they have a better chance of making it to the target). Dogs without explosives can be used for cover. Make sure there are plenty of reinforcement dogs to replace dogs used. Terror drones armed with explosives can be used as an alternative choice of suicide bombing with higher movement speed (can bomb farther targets than attack dogs), immunity to sniper fire and the ability to infect vehicles (the bomb will not detonate until the vehicle is destroyed by infection).

They can also demolish bridges in a similar fashion to that of the Navy SEALs. The only unit type that they prefer to keep undamaged are transports. Flak tracks are the best solution for quickly transporting Crazy Ivans across the battlefield, best accompanied by other vehicles. Additionally, when packed into Allied IFVs, they would turn them into miniature demolition trucks. Alternate solution is packing 5 Conscripts with explosives and putting them into the Flak track. As soon as the Flak track is destroyed, all five Conscripts will detonate with devastating results.

However, Crazy Ivans had a major disadvantage. As far as technology goes, the Allied Command always issued the latest weapons to their forces, including explosives. While Tanya and Navy SEALs were equipped with C4 explosives, the Soviets still issued the older trinitrotoluene (TNT)-based weapons to the Ivan. In the field, this meant that, unlike the C4 used by the Allies, which exploded instantly and guaranteed the total destruction of the targeted building, TNT took much more time to explode and heavily armoured buildings and units could withstand the explosion, requiring another TNT charge or a conventional attack to finish off.

The best defense against Crazy Ivans is to ensure that all entrances to a base are guarded (to prevent them from sneaking into the base). Pill boxes are a cheap solution for this, as they can gun down Crazy Ivans before they get close enough to do any damage. Engineers can defuse their bombs.

As their weapons are only effective at melee-range, any unit with anti-personnel weapons can easily shoot them down (and watch them explode in a spectacular manner) before they got too close.

The Crazy Ivan is voiced by Neil Ross, who also voiced the Kirov airship and British taunts in multiplayer.