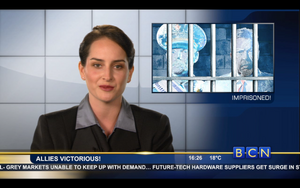 The unique Cryoprison is the result of Allied research into Cryotechnology. Being imprisoned in a cryoprison effectively means being frozen. This free the Allies from the hassle of feeding the inmates as well as the risk of escape, as the inmates cannot move unless defrosted. Known cryo-prisoners include Soviet leaders Premier Cherdenko and General Krukov, frozen at an unknown location following their defeat at Leningrad during the War of the Three Powers.

Yuriko Omega, several Tesla Troopers, Terror Drones, a Desolator, a few King Onis, Steel Ronins, Flak Troopers, Combat engineer and Imperial engineers were also imprisoned in another cryoprison, known as Camp Dakota, deep in the jungles of Guam, at the time of the Uprising but after some time Yuriko with the help of her psionics escaped from her cryoprison and utterly destroyed Camp Dakota.