A Cultist is a hybrid mind control unit of the Traveler-59 in Kane's Wrath.

The cultists are a fusion of two organisms; a captured human and a Prodigy parasite fused to their brain. The parasite overwhelms the emotional and logic centers of the brain, destroying the human's personality and turning them into just another member of the Cult of Traveler. Often, these Cultists fight in five-man squads, clad in robes.

New Cultists are created through a complex surgical procedure, that may not always be successful. The process begins by removing the skin around the head, and then the skull cracked along natural fissure lines and removed. To calm the human victim, cortical manipulators are used. The Prodigy spawn is then attached to the human, automatically controlling the important cerebral centers. With the help of the host brain, the spawn's mind control abilities are greatly increased. Once the process is finished, the symbiote is completely subservient to the Scrin. Like other Scrin infantry, it is healed by Tiberium exposure.

Strangely the Prodigy/Mastermind spawn is attached to the human upside down and thus when left idle can sometimes be seen upside down, giving the bug a walk. 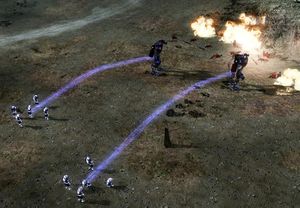 Cultists mind control a Purifier against a Militant rocket squad

These units are unarmed. However, they have the same ability as the Mastermind; they are able to take control of ground units. Unlike the Mastermind or Prodigy, Cultists can be trained in large numbers. They are unable to use their mental control abilities on epic units, air units, and buildings. The Cultists themselves are immune to mind control.

Despite their large squad size they can only control one unit at a time. Strangely, even if there is only one left, it can still control one unit. In theory, if they weren't grouped together, the same number of Cultists could control 5 units in total.

Their lack of armor leaves them particularly vulnerable to anti-personnel weaponry. Despite this, they appear to be far tougher than most infantry, able to survive more punishment.

Cultists can be garrisoned in bunkers and buildings. They cannot activate their mind control abilities while garrisoned, but they do maintain command of any units already controlled. This might prove useful in keeping them safe, should they capture a very nice unit, but beware garrison-clearing attacks.

The cultists' movement speed is greatly increased by the advanced articulators upgrade.

Unlike other Scrin units, the Cultists are capable of speaking in human language due to being partially human, albeit in distorted, echoing voices.