Cybernetics are a branch of science that deals with the issue of integrating technology and living tissue, creating hybrids. The technology has been under development since the mid-20th century to the mid-21st century.

The name cybernetics is something of a misnomer for this field of research, as cybernetics can actually include the study of multiple electronic systems, from computers to brains. A more specific term for this form of augmentation would be bionics.

In an effort to effectively counter Allied commando units (and their hired mercenaries, most notably Tanya Adams), the Soviet Union's leader Joseph Stalin commissioned a top-secret research program to determine the possibility of creating a man/machine hybrid - a cyborg. This was because the USSR had no special forces of their own, with most of their highly trained staff and officers having been executed by firing squads during the Great Purge of the 1920s and 1930s.

The result was Volkov and Chitzkoi. Volkov was designed as a killing machine - armed with a high caliber pistol by default, his metal endoskeleton with an integrated grenade launcher, coupled with a human brain, provided an excellent soldier. His aide, Chitzkoi, was a cybernetized shepherd dog, who was fitted with artificial muscles, allowing him to jump many times the distance an un-augmented dog could cover. However, these were the only known cyborgs in use by the Soviet Union. Mass production was apparently not an option.

Following the defeat of the Soviet Union, Volkov and Chitzkoi were captured and decommissioned. 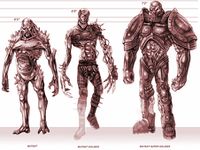 While preparing its plans for world domination, the Brotherhood managed to procure details of the Soviet cybernetics research. The data was considered an interesting project and archived. However, it was not until the beginning of the Nod Tiberium augmentation program that it was used.

Early results of the program, dubbed Project ReGenesis, produced the Initiate, a powerful creature lacking somewhat in mental capabilities that was the result of controlled Tiberium infusion into a given individual. The mutation could only be partially controlled, however. Dr Elena Petrova re-opened the data on Soviet cybernetic research, beginning a new chapter in Project ReGenesis development. The next generation mutant, the Acolyte, was developed using the early research technology, and while somewhat horrifying in appearance, he was superior in terms of strength and speed and at least equal in mental capability to a regular human, thanks to the addition of cybernetic components to compliment and control Tiberium enhancement. The last generation of cybernetically enhanced Tiberium mutants were the Templars, whose cybernetic enhancements were hidden behind heavy battle armour grafted onto their bodies.

With the defeat of Nod in the First Tiberium War, much of the research was believed to have been destroyed by GDI. That proved to be untrue, as the research continued, resulting in a technology that could be widespread and was relatively economical to field. The primary center of research were the R&D centers located in Central Asia, where Nod fanatical scientists experimented on deceased Nod members in an effort to create the perfect Nod warrior - unerringly obedient to Kane and without a shred of humanity left in him. The Cyborg was the first result of the project, codenamed Marked of Kane, and basically an armoured suit permanently joined to either a reanimated Nod member or a willing human who has undergone Divination, Tiberium enhancement. The augmentation was linked to the human nervous system via a set of intricate control chips in the frame.

The technology was extremely successful and it was researched further, resulting in the creation of powerful Cyborg Commando. They were once regular cyborgs who excelled in combat and were promoted to this more powerful frame. Their numbers were few and far in between; their resistant armour and powerful plasma guns derived from Scrin technology were incredibly expensive to produce and maintain.

The cyborg technology nearly resulted in the Brotherhood's demise during the Firestorm Crisis, when CABAL rose up against humanity and took over the Cyborg control chips, turning them against high ranking Nod commanders and the Brotherhood's forces in general. The cybernetic organisms were the mainstay of CABAL's army, who also developed a specialized cyborg, the Cyborg Reaper, for kidnapping new subjects for conversion. The advance of the cyborg army was frightening, un til the Brotherhood and GDI joined forces to defeat CABAL. One of the elements of the campaign was reprogramming a cyborg to upload a virus and sabotage four cyborg processing plants.

The pinnacle of cyborg technology was CABAL's Core Defender, a monumental robot incorporating the best of mechanized walker and cybernetic technology. This one-of-a-kind weapon was destroyed after a long battle by combined GDI and Nod forces.

As mentioned, prior to the Second Tiberium War, underground in Central Asia, fanatical Nod scientists began a covert project. Following the First Tiberium War, Kane reflected upon his defeat and realized the problem was human emotions. To achieve victory, Kane needed an army stripped of its emotions, and started a secret project to accomplish his goal. This research yielded some results, which helped in the development of cyborg infantry. However, success remained elusive, as while powerful, the Cyborgs and Cyborg Commandos had fundamental flaws that needed to be worked out.

Despite the difficulties, the scientists continued on and the results of this project produced what would be the core of the Marked of Kane. However, setbacks (such as the death of the scientists associated with the project) prevented the results of this project from being used during the Third Tiberium War and possibly tipping the war in Nod's favour. However, four years after the war, LEGION rebooted and under orders from Kane has reactivated the Marked of Kane control nodes in the wastes of Siberia, bringing the cyborg army online.

The Awakened and the Enlightened along with those who were called upon to serve formed the core of the Marked of Kane. Superior to the old cyborgs through overcoming the design flaws, Kane's,vision was fulfilled: an army without unnecessary emotions that would not hesitate where even the most faithful Nod follower would.

Additionally, the Redemption technology recovered in the research facility allowed militants to serve Nod long after their death.

Cybernetic enhancements and strong AI became unpopular following CABAL's uprising. GDI developed a limited man/machine interface between the Firehawk's AI and pilot. Nod's cybernetic research and development was also scaled back. The Black Hand of Nod came to revile cyborgs and cybernetics, and in general cyborgs disappeared from the Nod arsenal. A limited man/machine interface was developed for the Avatar's virtual sensory pod.

However, Nod interest in cyborgs and cybernetics was revived after the Third Tiberium War following the activation of the Marked of Kane. By the Fourth Tiberium War, cybernetics were common among Nod infantry, including Devouts, Reapers, Enlightened, and Cyborg Commandos, and were also integrated into Brotherhood vehicles, such as the Salamander with its cyborg gunners.