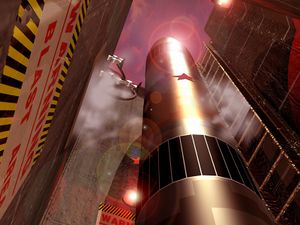 A Soviet ICBM in the main base prepares for launch.

The Dark Horseman (Russian: Тёмный Всадник) military base was the primary research site of USSR's nuclear weapons project. The base was located in southern parts of Russia, on an elevated mesa, heavily protected by tanks, SAM sites, Tesla coils and an air base located to the east. This site was attacked by Allied Field Commander A9 following information from a defecting Soviet Major.

The main base was located on an elevated plateau, surrounded with concrete walls and checkpoints, heavily protected by Soviet soldiers and tanks. The research center for nuclear weaponry was located in the north-eastern part of the facility, while the actual control center and four missile silos were located in the north-western part of the facility, apparently completely isolated from the rest of the base. Anti-personnel mines also protected the command center from enemy soldiers from infiltrating the center.

Four two kiloton warheads were produced in the facility and placed in the missile silos, fully prepared for launch. They were sent against major European cities when it became apparent that the Dark Horseman would fall.

It was then that the Allies broke through the exterior wall protecting the control center and infiltrated it, revealing that the facility's control center was located underground, and the entrance to the isolated compound was located beneath ground, perfectly concealed on the surface. The silo controls were accessible from this level, and the missiles could be shut down remotely from each of the control terminals. In addition to housing the warheads, the underground facilities also were equipped with a tank hangar, for repair and refitting of Soviet military vehicles.

To the north-east of the base, a smaller military airforce base was located, which was tasked with protecting the site by any means necessary. In addition to fielding Mi-24 Hinds and MiG 23's, the base also acted as an oil pumping station, drilling into oil fields located beneath the plateau. The excavated oil was stockpiled in the base, which proved an inexcusable mistake when A9 assaulting the base ignited the stockpiles, causing significant damage to the base.